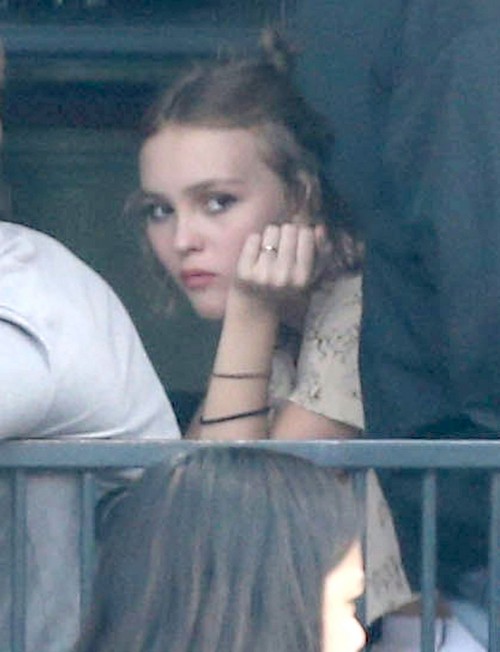 Johnny Depp has gone from being one of the most respected and liked actors in Hollywood to becoming the laughingstock of the tabloid industry. His box office clout has all but disappeared, and you could attribute most of the disdain surrounding him to his engagement to Amber Heard.

Forget the age difference between them, or even the fact that he was rumored to have cheated on longtime partner Vanessa Paradis with Amber. Nobody ever expected Johnny Depp to be that guy – you know, the sleazy 50-something man with a fiance who’s 23 years younger than him. And trust me, nobody dislikes his new relationship more than his children, Lily-Rose Depp and Jack Depp.

But for some reason, a lot of outlets are obsessed with making it seem like Lily-Rose and Amber are BFFs. For example, Lily-Rose and a friend were out in West Hollywood yesterday, and Fame’s blurb was: “Johnny’s fiance Amber Heard has built a strong ‘stepmom’ bond with Lily and Johnny’s son Jack.”

As IF Lily-Rose and Jack would be comfortable becoming close to Amber when she could literally be their sister. As IF they are going get close to the woman who split up their family. Plus, I don’t understand how all these people assume that Vanessa’s children would ever choose Amber over their own mother. If you mother was cheated on and ditched for a younger woman, would you build a ‘strong stepmom bond‘ with the woman that your father cheated with?

Sure, for appearances sake, they have to spend time with Amber. In the end, they’re not going to want to upset their father either, but there’s no way Lily-Rose and Jack are as close to Amber as some of these outlets pretend. Of course, Amber could also be influencing the media to showcase her in the savior stepmother light, even though we know that couldn’t be farther from the truth.