Juan Pablo The Bachelor Is A Lowlife Desperate For Money And Fame: He’s Not The Dreamboat Everyone Expected! (PHOTO) 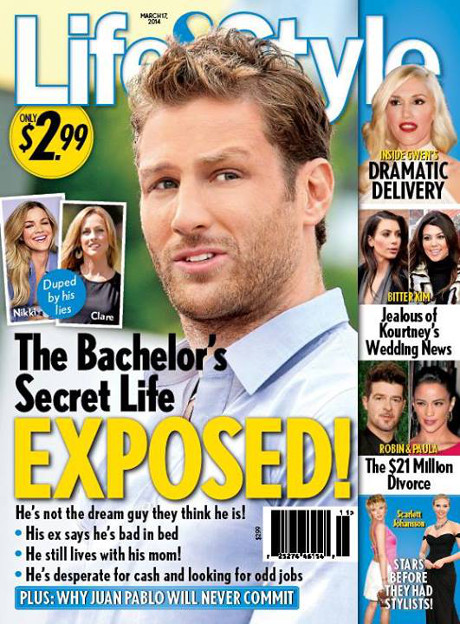 In the most recent edition of Life & Style, The Bachelor’s Juan Pablo is ripped to shreds. Before the season started, everyone couldn’t get enough of the dreamboat-ness that was Juan Pablo. Now, the once professional soccer player is being knocked down left and right, and countless people seem to be crawling out of the woodwork with juicy, intimate glimpses into the pathetic life of JP.

The magazine claims that 32-year-old Juan Pablo still lives at home with his parents and a recent ex goes on the record stating the bachelor is bad in bed! And if those statement aren’t enough to get people going, the tabloid also suggests that Juan Pablo is desperate for money and has become a major famewhore in attempts to make a name for himself in the industry — or, really, any industry that manages to accept him after his time on the show. I’m sure he’s not too picky.

“Most of the money Juan Pablo got from soccer is probably long gone. Money must be tight, because he lives in a three-bedroom apartment with his mom and dad. The reason he was so interested in being the Bachelor was to make money and become more famous. He’s always actively looking for money and work.”

Plus, the magazine also goes into the REAL reason why Juan Pablo will never commit to a monogamous relationship. Yikes. This season of The Bachelor proved to be an absolute mess.

A friend of the contestants’ told the magazine, “The winner is about to be very surprised. She has no idea what she’s in for.”