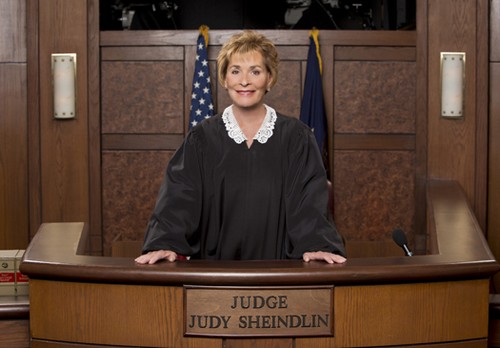 Tonight on CBS Judge Judy airs as a primetime special. Tonight’s episode will be a one-hour special for the CBS Television Network that includes new cases and takes a look at how Judge Judith Sheindlin transitioned from New York Family Court Judge to ‘Judge Judy.’

Judge Sheindlin’s no-nonsense, tough but fair approach to justice has established her as a pop culture icon for generations of viewers around the globe. In each case, Judge Sheindlin applies her unique ability to act as a true moral compass and her uncanny ability to ferret out the truth. Also highlighted are classic Judyisms, her hilarious one-liners that have become part of America’s lexicon,

On tonight’s episode, the special will include excerpts from the 1993, 60 minutes profile on Judge Sheindlin that led to her being discovered by Hollywood, as well as from the 2003 story when the program revisited the Judge 10 years later.

Tonight’s primetime special of Judge Judy is something you don’t want to miss, prepare yourself for more of Judge Judy’s clever one liners at 8PM EST on CBS. Let us know what you think of Judge Judy in the comments down below.

Tonight’s special primetime episode of Judge Judy kicks off with Case 565, Jibryne Karter is suing the defendant Liberty for punching him at his father’s bar. On January 25th, Karter was speaking to Bruce Liberty’s girlfriend because she wanted to see surveillance tapes from the night before, and Liberty allegedly punched him for talking to her. Liberty’s girlfriend Lindsey Doyle stands up and announces that she never asked to see the surveillance video for any night.

Judge Judy begins questioning Lindsey Doyle about the night of January 25th. Judy wants to know why Lindsey showed up to the bar an hour earlier than the time she was supposed to meet her boyfriend Liberty. Judge Judy is getting irritated because she can tell Lindsey isn’t telling her the truth. She declares, “all of the answers that Lindsey has given her so far are untruthful.” She tells Lindsey to go sit down.

Judge Judy tells her to Karter to explain what happened. He says that Lindsey approached him and was crying and wanted to know if she had seen the surveillance tape from the night before, while he is describing the altercation to Lindsey her boyfriend Bruce walked into the bar and punched Karter.

Judge Judy decides to watch the surveillance tapes from the bar. And, sure enough she sees Karter and Lindsey talking, and Bruce Liberty rushes in to the scene and punches him.

Judge Judy rules in Karter’s favor and orders Bruce to pay him $5,000.

The next case to come before Judge Judy is Brandon Lowe and Brittany Grove. Brittany is suing Brandon for $1,813 in engine repair. Brittany let Brandon drive her car, and he decided to drag race her car. Brandon confesses that he drove her 2002 Saturn at 80 MPH, and then the engine blew on her car. Brandon doesn’t think that he should have to pay for her car because she was in the backseat and egging him on and encouraging him to race the car.

Next on the primetime Judge Judy special is 60 Minutes video footage from twenty years ago of Judy in New York City family court, where she first started her career as the infamous “Judge Judy.” Judy used to see over 20 cases a day in Family Court, and her career has skyrocketed since then. She never believed she would ever become a national TV star, or make hundreds of millions of dollars just to do what she does every day.

The next case on primetime Judge Judy includes Todd Duplessis and Beau Shaddock. Beau claims that after a road rage incident Todd damaged his car by kicking it. Duplessis claims that Beau was driving erratically and when he stopped at a convenient station he followed him and confronted him.

According to Beau he was driving down the street and Todd was honking his horn and flailing his arms at him. When Beau pulled into the gas station Todd followed him and pulled in to the parking lot and blocked his car so he couldn’t leave. Then he approached his car and kicked it “so hard that is rocked back and forth.”

Todd Duplessis tries to argue that Beau is lying, but Judge Judy doesn’t want to hear it. The bottom line is he never should have gotten out of his car. He should have called the cops and told them about the incident and the make and model of the car.

Judge Judy rules in the favor of Beau and orders Todd to pay him $1100.00 for the damage he caused when he kicked Beau’s car.