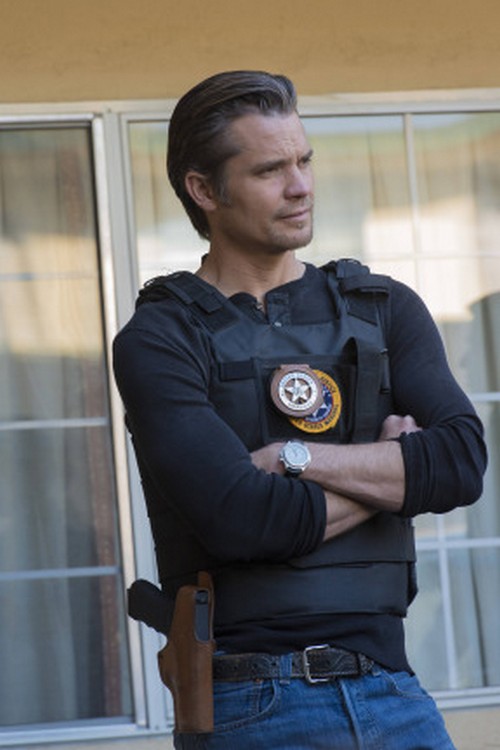 Tonight JUSTIFIED returns to the FX with a whole new episode called, “Raw Deal.”  On tonight’s episode Raylan pursues a small time grifter with big time enemies.  Did you watch last week’s season 5 episode 6?  We did and we recapped it right here for you.

On last week’s episode an attack on Alison sent Raylan to Harlan in search of payback, while Boyd scrambled to arrange protection for Ava.  The episode was written by Ingrid Escajeda; directed by Don Kurt.

On tonight’s episode Boyd and the Crowes fly South for a crucial drug score, while Raylan pursues a small time grifter with big time enemies.

Tonight’s Season 5 episode 7  looks like it is going to be great and you won’t want to miss it, so be sure to tune in for our live coverage of FX’s  Justified at 10:00 PM EST! While you wait for our recap hit the comments and let us know how excited you are about the new season of Justified?

The Crowes pack up for the job. They tell the kid to watch out for Chelsea while they’re gone. At the jail, Ava watches Gretchen. Her new buddy Penny tells her that her visitor isn’t coming and she needs to rely on the heavenly mother. Ava says no thanks to God and Penny says it could keep her alive.

Boyd doesn’t find Johnny and says they need to go to Mexico and get his heroin. He looks at the Crowes thinking whether to take them. Hmmm….

Raglan drinks coffee when a complainer comes in about reward money. Art is punishing him with early arrival and handling walk ins. The guy wants backgammon money. Mr Falafel is an online backgammon guru and says they took his money when they did. Charles Monroe owned the site. Raglan pulls it up and shows him they misspelled Marshal Service on the website and that he was lied to and his money taken. Rachel chews Raylan out for letting the guy leave. He makes excuses and she asks Tim why he didn’t tell him he was on walk ins. They decide the backgammon company’s web guy probably stole the money and put up the fake page. Tim says he prefers cribbage.

TC and his girl play a video game when his new client shows up. It’s a big guy -Kemp- and he has Larry the backgammon guy with him. TC goes for a taser and Kemp grabs him. Larry demands the money before he gets hurt.

They hold a gun to his girl and she admits he stole it. Larry says he owes him 250k and he dials the cops to for e it out of him. Kemp decides he wants more and shoots Larry right thru his smart phone and skull.

At the prison yard, Ava watches the prayer meeting. Judith approaches Ava afterward. Ava says she doesn’t need God and Judith says its easy when you can rely on your looks. Judith asks if she wants protection and Ava says she does. Judith tells her she doesn’t seem ready to hear the word. Then she tells Ava they move the drugs even though they don’t approve of it but it keep them safe. She says Penny will show her the ropes.

Johnny calls his buddy back in Harlan. They’re trying to get hold of Hot Rod’s bank account. They’re having no luck. Johnny says he’ll be back tomorrow. He meets with the cartel guy who asks where Boyd is and he says he’s there instead of Boys to outbid him. He hops in with them but has to leave his muscle behind.

Wendy asks Allison what turns Raylan on and his GF is understandably annoyed. I think she was distracting her from the fact she was caught coming out of her office. Wendy says she was there to talk to her boss!!

The thugs bring Boyd  to Mr Yoon’s house. Hmm. Johnny is already there and they leave the cousins to wait together. Johnny asks how Memphis was and how much money he brought. Yoon comes in and tells them this is a first. He asks for five minutes to deal with Johnny. Yoon says he promised him a million and Boyd says he doesn’t have it. Yoon zip ties them both and says whoever has the most money wins. He leaves them.

Kemp tells TC to hand over the money but he explains it’s in bitcoins and will take some time. Candice cleans up the blood. He says it will take eight hours. Kemp says there are cops out front. He drags Candice out and says he’s got eight hours before he starts cutting parts off. They walk right past Raylan but pass his sniff test. TC tries to get rid of him but Raylan pushes his way in.  He asks about the backgammon site and TV runs and jumps out the so Dow and shimmies down the flagpole then flips Raylan off and runs away. He sees blood and finds Larry’s body in the tub and says – well shit.

Tim laughs at Raylan for losing the one legged computer geek. TC also put a new message on the website saying he made Raylan his bitch. They won’t let him go on the hunt and Rachel tells him to follow up with the guy from the stairs.

Raylan posts a reply to the message saying he’ll get him later. Then Allison calls and tells him she got suspended because of Wendy Crowe.

Boyd asks Johnny if he really got Hot Rod’s cash. Johnny says he does and asks Boyd if he’s going to try and use his silver tongue to get out of the scrape. Boyd quotes philosophy and then reminds him of better days between them. Johnny makes a smart remark about taking a crack at Ava and Boyd says at least they keep it in the family.

A guy shows up with Johnny’s cash and Yoon says J gets the business and Boyd to do with what he wants as long as he kills him somewhere else.

Allison tells Raylan that Wendy dug up every skeleton in her past to get her suspended. Raylan says he’d like a two week suspension. Allison tells him Wendy also has her eye on him. Raylan’s card is declined and the server says she has to destroy his card. His phone rings. It’s TC who calls him deputy dipshit who tells him he got his card blocked and drained his bank accounts. He tells Raylan to leave him alone if he wants his money back. Raylan threatens him. Tim has a computer guy that traced the call and Raylan is on the way to get him.

Kendall tries to talk to her but she blows him off and heads back to Lexington. He yells at a guy trying to steal whiskey. He sends the guy packing and calls His Uncle Jack. He asks if he’s living near Kentucky.

Penny introduces Ava to Vernon. A guard comes in and says hi also. Turns out you have to service the guard who looks the other way. Ava takes the drugs and goes.

Kemp tells Candice he wants a boat and she says it’s lame. There’s a knock at the door. It’s the Marshals. Turns out TC led them there. Raylan is upset and says TC is the only reason he came.

Tim talks to Chris the PC guy and says that TC spooked the phone. Candice tells them she knows where TC is since she’s mad at him. He’s in his grandma’s basement when Raylan and Tim find him. He hops over and grabs his leg and surrenders. Raylan asks how he lost his leg and he says from cancer. He tells them he won all the stuff from call in contests and offers to teach Raylan how to be caller number seven.

Rachel tells him that revoking Daryl’s parole is a no go because Wendy raised a stink. Raylan goes in to ask if he’s always going to get the silent treatment and shit duty. He demands that Art treat him better or transfer him. He says he’ll go anywhere. Art says he’ll get to it when he feels like it and Raylan says he’s on vacation until then.

Judith tells Ava that Vernon got caught with drugs. Duh. Ava planted it. J is worried the prisoners will revolt if they find out their source is gone. Ava says she can help get some in. Judith shows her some scars and Ava says she has some of her own. Judith tells her she hopes she didn’t get him busted just to keep from screwing a guard. J walks off and Penny tells Ava if she can get the dope she has a way to get it in.

Raylan has a drink with Wendy. They trade insults about kids. He says he knows she’s faking being a lawyer. She tells him his abuse of power is sexy. He asks her to help h get Daryl and says it will make all their lives better. He tells her Daryl killed Dewey and she’s shocked.

She invited him up to her room and he tells her to think about his offer. He asks her to pay for his drinks because his card is cancelled.

In the desert, Johnny gets ready to get rid of Boyd but first he wants to show him his stash in the truck. They pop of open and it’s full of Crowes with guns! Turns out Yoon and Boyd set Johnny up. They offer Hot Rod’s former crew their old jobs back. They all agree. Boyd tells Johnny that if you can’t lead and refuse to follow you die alone in the desert. They’re going to kill h elsewhere but then Daryl flips out and shoots Hot Rods guys. Johnny mocks him and says he won’t get the drugs out of Mexico and Boyd shoots him in the heart. He calls Yoon to tell him they have a problem.