Justin Bieber and Selena Gomez at Coachella – Making Out and In Love! 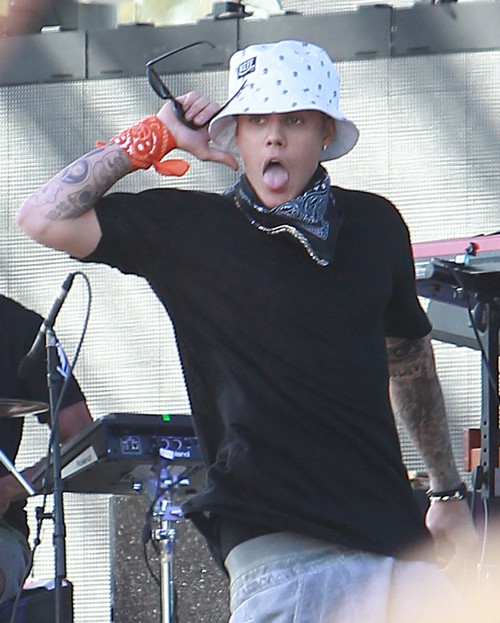 So much for not getting back together, huh? Although Justin Bieber and Selena Gomez tried to do some damage control [relationship control?] by having ‘sources’ claim that they weren’t back together, we’ve got picture proof that definitively says otherwise.

Some fan photos from the 2014 Coachella music festival have made their way online, thanks to the enterprising detective work of the TMZ people. In those pictures, Selena and Justin are cuddling, making out, and generally acting like a couple. Not just any couple, but a couple that’s comfortable with public displays of affection, and a couple that is DATING. They can claim they’re not dating for as long as they want, but there’s no other word for what the’re doing – especially since they seem to spend all their free time together.

Sources say that Justin and Selena were spending the whole day together prior to when those pictures were taken, and at one point, Selena was reportedly sitting on Justin’s lap. Now, those photos are also humiliating for completely different reasons. Mainly, Selena looks normal while Justin’s wearing sunglasses, a bandana around his neck, and a ridiculous looking hat. How can she stand being seen with him public looking like that? That too, not just being seen with him, but seen making out with him!

Ugh. Anyway, it’s obvious that this relationship is only getting more serious, despite their attempts to keep it undercover. I always say though, celebrities who claim to want privacy but then end up going to Coachella are full of it [I’m looking at you, Hilary Duff and Mike Comrie]. If you’re going to get photographed smooching and cuddling at Coachella, you want the whole world to know your business.

Well two things we can infer from this PDA on Selena’s part – she doesn’t care how her fired parents feel about anything and she really doesn’t care about Taylor Swift!