Justin Bieber Calls Selena Gomez An Elegant Princess – His Way Of Trying To Rekindle Their Romance Before Drake Steals Her Heart? (PHOTO) 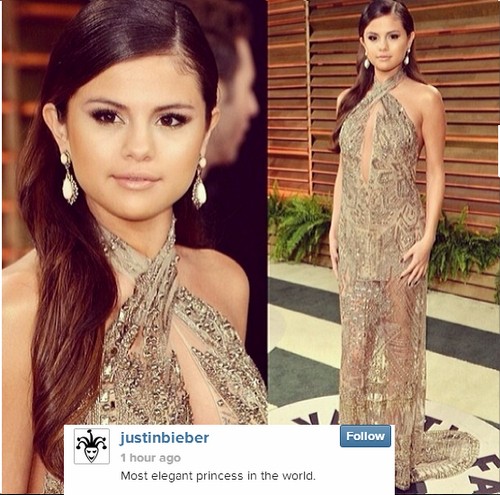 In the ongoing drama between Justin Bieber and Selena Gomez, the Beebz has made another move, and many are wondering if his recent action is a ploy to ultimately win back the singer/actress’s heart. On March 3rd, Justin posted a rather adorable note on Selena’s Instagram. The note said, “Most elegant princess in the world.” The comment was left on a picture of SelGo at the post-Oscar Vanity Fair party. That party is the hippest, most coveted gathering in all of Hollywood, and it’s no surprise that Selena was there in a grand dress that sparked something in Bieber.

Does this mean that Justin Bieber is looking to rekindle his once-hot romance with SelGo — the girl who seems like she’s (at times) trying to move on from the hip-hop disaster? There has been lots of gossip over the past few months talking about whether or not Selena is still in love with Bieber. Many would like to think she is, but others simply need her to move on and get a new man in her life.

Could a new man be the reason why Justin Bieber posted that super sweet note on her account? Recently, Selena has been linked to Drake, an artist that would definitely give Bieber a run for his money. While Drake is by no means the most mature performing artist in the industry, he’s a far cry from Justin’s psychotic and crazy antics.

What do you think about Justin’s comment? Let us know your thoughts in the comments section below. We want to hear from you!