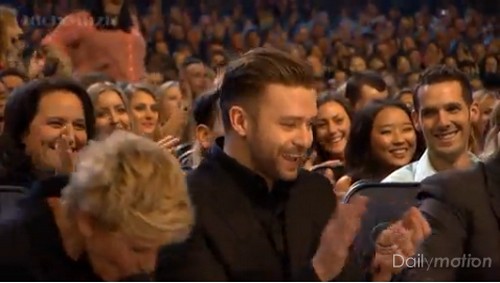 Justin Timberlake’s career has been booming over the last few months. He has cleaned up at both the AMA’s and last nights’ People’s Choice Awards and then there was yet another hilarious SNL gig under his belt. Along the way his wife, Jessica Biel has been noticeably MIA and rarely mentioned leading to serious speculation that the couple’s 14 month marriage is in trouble already.

Justin finally made an attempt to squash those rumors by acknowledging Jess during one of his acceptance speeches last night. He thanked her for teaching him patience which is pretty telling. It wasn’t a moment of gushing about his love for his supportive wife, instead it sounded like he was acknowledging that there are issues. Exactly what is Jess patient with? His behavior while she sits at home missing his important career moments of the year because Justin would rather fly solo? The fact that she married him expecting to start a family only to find that Justin’s career is still more important than babies?

Jess split up from that guy for 6 months back in 2011 and maybe she’s patiently waiting for the guy that Justin pretended to be in order to win her over to return for real? Justin thought that by even mentioning his wife it would quiet the rumors but instead his words are raising eyebrows. Do you think their marriage is really in trouble? Not showing up on the red carpet to support each other sends a very strong message in Hollywood, one that both Jess and Justin are well aware of. Is a split in the works here? Tell us your thoughts in the comments below!