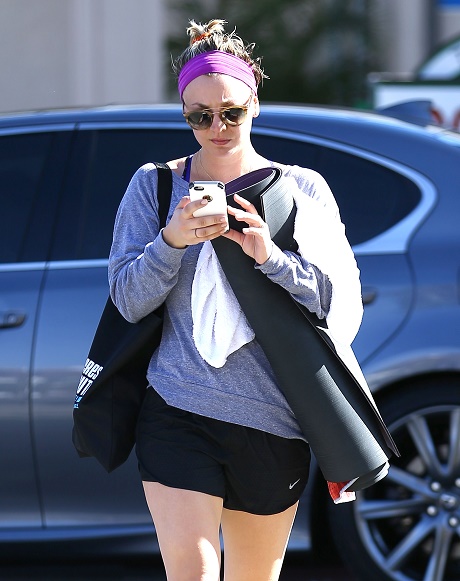 Kaley Cuoco and Ryan Sweeting must think we’re stupid. Actually, I’m pretty sure that Kaley Cuoco does think we’re stupid, since she and Henry Cavill engaged in the world’s worst PR show of all time. Who did they think they were kidding with that relationship farce? And now, Kaley’s attempting numero dos round of said PR stupidity, but this time with her husband, Ryan Sweeting.

So for those of who you who don’t know, Kaley Cuoco and Ryan Sweeting got married mere months [practically days] after Kaley broke up with Henry Cavill, a.k.a. Superman. It was pretty clear to everyone that Kaley was using Ryan as her rebound, but then that turned into a marriage. We were confused, because that’s not how rebounds work… right? Anyway, Kaley and Ryan got married in the world’s quickest first date-engagement conversion, and so OF COURSE they’re already having marriage problems. Imagine a regular Hollywood marriage, but then hasten everything along times ten. And you get Kaley Cuoco and Ryan Sweeting.

Anyway, Kaley and Ryan have steadfastly denied any problems in their marriage, not even that Ryan is jealous of Kaley’s earning potential, or that Kaley’s diva demands are driving Ryan away. And because Kaley is a connoisseur of using PR for publicity fixes, she uploaded an online pic with her ‘beloved’ hubby, Ryan Sweeting. Some morons online think that this is ‘proof’ that Kaley and Ryan are perfectly all right, just because they posted a picture of themselves online.

I guess these same morons have never heard of Beyonce and Jay-Z, or Mariah Carey and Nick Cannon, or Kourtney Kardashian and Scott Disick, or Lamar Odom and Khloe Kardashian, or ANY OTHER CELEBRITY COUPLE EVER. They’re celebrities for a reason – they use PR! Kaley Cuoco and Ryan Sweeting uploading a photo literally means nothing in the grand scheme of things, only that they don’t want people to know that their marriage is in trouble. That’s it. Period. End of story.