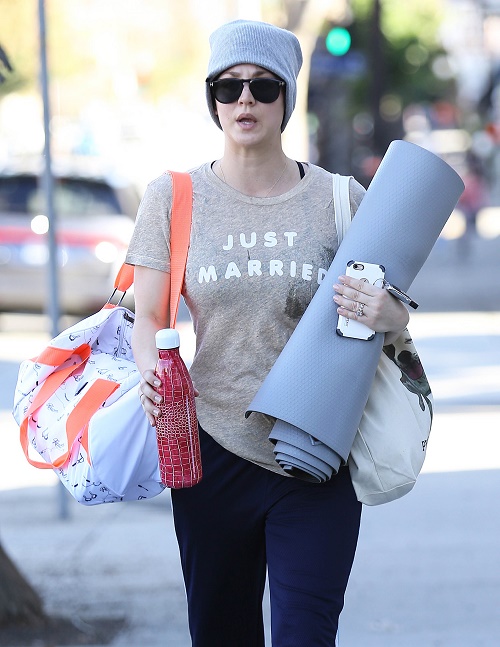 New Years Eve is right around the corner, and that means so is Big Bang Theory star Kaley Cuoco  first wedding anniversary. Last year on December 31st, Kaley shocked fans when she married her now hubby Ryan Sweeting in an unexpected ceremony with her friends and family. Apparently, Kaley expects all of her friends and family to gather on New Year’s Eve again this year to celebrate her and hubby Ryan’s anniversary with them on December 31st – but no one wants to come!

According to the December 29th edition of OK! Magazine, “Kaley Cuoco-Sweeting will be ringing in the new year and celebrating her first anniversary with hubby Ryan Sweeting – and she wants family and friends to make it an ongoing tradition to party with them. The problem is, nobody wants to! A source reveals that after she strong-armed her friends in to giving up their holiday last year to attend her wedding, they’re reluctant to make their year-end hurrah all about Kaley.” OK! Magazine’s source goes on to explain that Kaley’s friends are growing weary of her diva mentality – and they are sick of her expecting them to drop everything and plan their lives around her schedule.

New Year’s Eve is a big deal for people, and although planning a wedding on New Year’s Eve was exciting – Kaley should have expected her anniversaries would be overshadowed by the holiday. Ironically, this is not the first report that has emerged this year claiming that the Big Bang Theory’s stardom has gone to her head, and we’re not exactly shocked that she expects everyone to celebrate her wedding anniversary instead of New year’s.

Do you think that Kaley Cuoco-Sweeting is being a diva? Or should her friends and family be more considerate of the fact that it is her wedding anniversary? Let us know what you think in the comments below!