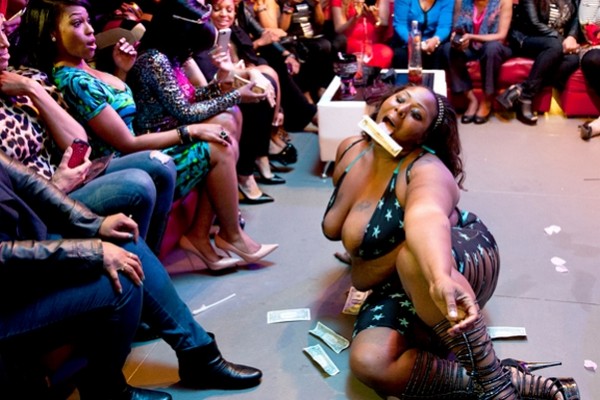 Tonight on Bravo get ready for Kandi Burguss’ RHOA spinoff called, Kandi’s Wedding. The show airs with a new episode called “Dis-Engaged.”  On tonight’s episode With Kandi and Todd’s wedding only a few days away, Kandi finally sends Todd the daunting pre-nup and requests him to sign it. Concerned that he might not be protected by the pre-nup, Todd seeks the advice of a lawyer who shocks Todd when he advises him not to sign.

On the last episode with only two weeks left until they exchange vows, Todd’s mother Sharon was scheduled to arrive from New York and the timing couldn’t be better for marital advice, as Sharon was understandably upset over Momma Joyce’s accusations towards her son. Tensions rose as Kandi and Todd debated whether having their mothers meet each other before the wedding was a good idea. Meanwhile, as the Matron and Maid of Honor compete for their best friend’s affection, the situation reaches a boiling point. Did you watch the last episode? If you missed it we have a full and detailed recap, right here for you.

On tonight’s episode With Kandi and Todd’s wedding only a few days away, Todd receives the pre-nup from Kandi who wants him to sign it but he is concerned and seeks some advice; his lawyer advises him not to sign it. The clock is ticking and wedding guests have started to arrive in Atlanta. Unaware of how serious the pre-nup situation is becoming, Todd and Kandi’s friends continue planning parties for the bride and groom to celebrate their last night of being single. Kandi’s bachelorette party is a fun girls night with outrageous entertainment hand delivered by Phaedra. Over at Bar One, Todd’s bachelor party gets a little out of control with Todd nearly breaking the “party rules” Kandi had laid out for him. During the wedding rehearsal, things take a turn for the worse when Todd tells Kandi about his reservations with signing the prenup leading to a heated argument, and a division between Kandi and Todd that no one saw coming less than 24 hours before the wedding.

Tonight is going to be a fun episode of Kandi’s Wedding for sure and you’re not going to want to miss a minute. Tune in at 8pm EST on Bravo and we’ll be recapping it right here for you but in the meantime, hit up the comments and let us know your thoughts on the new Spinoff?

RECAP: For the next couple of days, Momma Joyce and Todd’s mother are going to be in close contact with each other. It’s the final days leading to the wedding and there’s a lot of family occasions like the rehearsal dinner coming up so all Kandi wants is for everyone to get along. If not for themselves then at least for her. But that won’t happen until certain people have peace of mind. And that means Todd better hurry up and sign that pre-nup.

Kandi’s lawyers waited up to the last second to hand over the pre-nup and Todd didn’t really appreciate how he was being “handled” because it left him little to no time to contest or even argue points in the settlement that he doesn’t like. And there are parts he doesn’t care for. Like in case of Kandi’s demise; he gets absolutely nothing which both he and his lawyer find incredibly unfair. Todd claims to have given up on opportunities to work outside of the country depending on how Kandi felt about it so now it comes across as if his professional sacrifices meant nothing.

Nor does the pre-nup says he’ll get anything for the times he’s had and will continue to help Kandi out with her own career.

Todd’s lawyer wants him to get something instead of nothing. And Todd is willing to agree with him seeing as that is his lawyer and he feel the man has his best interests at heart. But what he fails to understand is that Kandi’s lawyers don’t want to give him any kind of foothold in the pre-nup. To do so may eventually grant Todd more down the road in case of a divorce. Kandi’s lawyers won’t want to budge and Todd’s lawyer wants to take advantage – so who will win?

The respective bachelor/bachelorette parties are underway and before anyone could get into trouble by doing something stupid both Todd and Kandi agreed early on to not doing anything too wild. However Kandi kept up her end of the bargain better than her future husband did. Phaedra, her “freaky” friend, provided the entertainment for it. And rather than have the typical male stripper – Kandi got some very talented female strippers. One of them also happened to be a dwarf.

The little person fell during her act and still she managed to get right back up there to finish her set. As for Todd’ party, “his boys” surrounded him with scantily clad women bent on feeding him strawberries. The only time he ever got wilder than that was when one of the strippers gave him a special lap dance both while sitting down and laying down.
It was a fun night had by all, but by the next day the blissful buzz was gone. The pre-nup argument came to head at the wedding rehearsal. They did a run through and that was fine. Though the actual problem came up when Kandi sat down to speak with Todd. Her lawyers got back to her about the notes Todd’s lawyer has been sending over and they wanted Kandi to put off the wedding seeing all the “notes” appear to be about money.

Naturally, Kandi’s lawyers are concerned about their client’s well-being and even Kandi has to wonder why the lawyer feels the need to demand money.
So Kandi confronted Todd with what his lawyer has been doing and oddly all he has to say is that lawyer found the contract to be unfavorable towards his own interests. And Kandi isn’t buying that. No matter how many times Todd say it isn’t about money the fact that this is all his lawyer talking about makes his real position pretty clear. Todd made it known to his lawyer that he’s had to give up things and now that man is painting a picture to make Todd appear like the stay at home dad and unpaid partner of Kandi Buress.

One, they don’t have any kids. And two, Todd could work just fine with anyone else besides Kandi. She’s never tried to stop him and when they do work together – he’s known damn well from the start that he was getting a cut. Asking for more than that is only making him looking greedy and Mama Joyce look right!