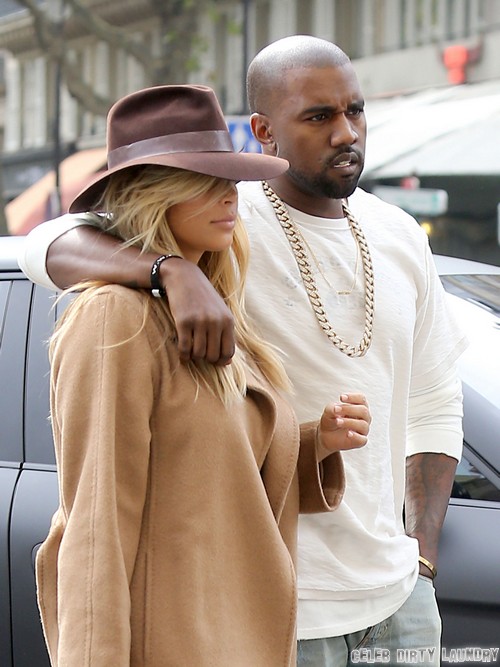 It looks like Kim Kardashian’s baby-daddy Kanye West has let his temper get the best of him… again. According to TMZ Kardashian and West attacked an 18 year old man in a chiropractor’s office in Beverly Hills today, after he allegedly swore at Kardashian and made racial slurs.

Kardashian was headed into the Beverly Hills medical office, when she was bombarded by paparazzi. The 18 year old then proceeded to help Kardashian safely maneuver into the office, by holding the door for her and shielding her from the paparazzi. However, while holding the door for the Keeping Up With The Kardashians star the 18 year old commented, “F**k these fa**ot-ass n****rs!,” referring to the paparazzi. According to TMZ Kim told the man it was “not appropriate to use the N-word.” The man then went on to say “F**k you bitch. Just trying to help you. Shut up n****r lover, stupid slut.”

Kim Kardashian was not impressed with the racist man, so she ran and got baby-daddy Kanye West and told on him. Kim waited for West to arrive at the Beverly Hills office and then the two proceeded to rush in and attack the 18 year old while he sat in the waiting room waiting for his appointment. In true Bonne and Clyde fashion, West assaulted the man, punching him, while his baby-mama Kim watched proudly and screamed at him. Kim reportedly thought the assault was completely justified because they have him on tape referring to her as a “n—-r lover.”

According to TMZ the Beverly Hills Police were called to the scene, and the 18 year old man will be pressing charges against Kanye West.