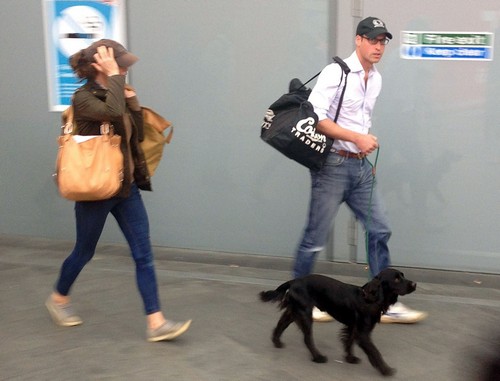 Kate Middleton’s morning sickness illness hypermesis gravidarum is slowly starting to improve as she eases out of her first trimester of pregnancy, but royal sources revealed that she still hasn’t made a full recovery. In fact, several reports this morning confirmed that Kate Middleton has been staying with her parents, Carole and Michael Middleton, and as her morning sickness continues. The same sources confirmed that the pressure of living in the palace and surrounded by 24/7 staff ended up getting to her. What pressure? Are we to believe that Kate was stressed out by having too many servants and doctor’s house calls?

WHAT? How about an alternative EXCLUSIVE CDL theory – Kate Middleton and Prince William are fighting! Yes, Kate’s hormones are raging and William and the Princess are not getting along so she has left her hubby. We will elaborate on this at the end of the article.

Prince William has been picking up the slack while Kate’s been recuperating, resting, and avoiding the rest of the world at the Middleton’s Bucklebury home. However, the fact that Kate is staying at Bucklebury and not Kensington – which is where all her main doctors are – says that she’s recovering quite well. Kate may not be at her full strength yet – and we know she’s already prone to fits of laziness – but she’s not some injured ballerina that can’t walk anywhere.

We’d already heard that the palace was planning to start sending Kate out on trips and events again in late October, and that timeline fits Kate Middleton’s recovery schedule. Usually, the expectant mothers make a proper recovery from Hyperemesis Gravidarum after 16 weeks of pregnancy, and Kate is still supposedly in her 10th week of pregnancy. Last time Kate was pregnant with Prince George, it was reportedly around the 13-week mark that she started doing royal engagements again, so I would say the late October date sounds about right. The royals can’t really afford to wait until Kate makes a full recovery, especially not when public sentiment about the royals is pretty low at the moment.

Back to the ‘fighting’ theory for why Kate is staying at her mother’s house: the unnamed source claimed to People: “When you’re ill, the place you feel most comfortable is at home with your mum, isn’t it? When she’s there, Kate can just relax and sit on the sofa and not have to worry about having to deal with all the staff and everything else that comes with a big palace full of rooms.” First of all, nobody close to Princess Kate is leaking any information to an American tabloid. But our alternative and more likely theory makes sense. Prince William and Kate Middleton are fighting. When do married woman go home to their parents’ house? After a falling out, that is when. What are Kate and Will fighting about? We don’t know yet but when we find out we will let you know. One thing for sure, Kate’s mom knows. What do you think?

Update: Star Magazine reported today that Kate Middleton is pregnant with twin girls and that Prince William has already told Queen Elizabeth. This report has little chance of accuracy since Star erroneously mentions that Carole Middleton has moved into Kensington Palace which of course is 100% false as Kate has in fact moved into her mom’s home in Bucklebury.

Another report by Us Weekly suggest that Kate and Will have reconciled and the Prince is visiting his Princess at her mom’s, nice!

Update: Kate’s first public appearance and engagement since falling sick ill be as follows: “Duke and Duchess of Cambridge are expected to greet the President of Singapore and his wife during a royal engagement on Sunday, Oct. 21. They will meet with their visitors on behalf of Queen Elizabeth II, at the Royal Garden Hotel in London.”