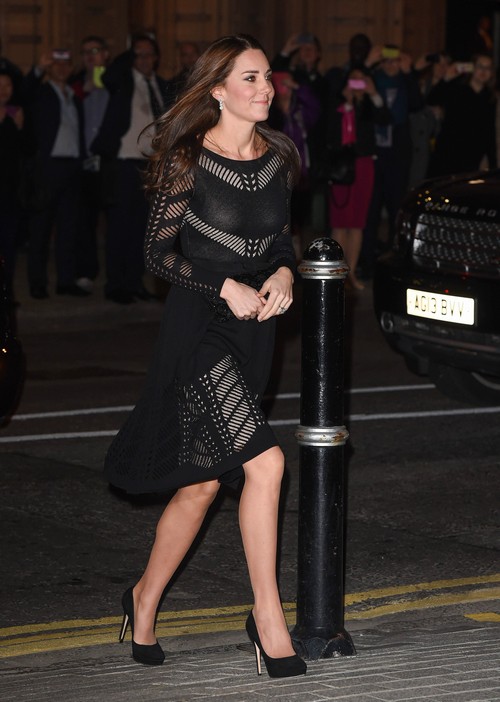 Everyone agreed that Kate Middleton looked amazing last week on her first public appearances since announcing her second child pregnancy, everyone except Queen Elizabeth, that is! Apparently Elizabeth seeing super skinny Angelina Jolie when she awarded her the honorary Dame title recently was a shock for the monarch and got her to worrying about Kate Middleton’s weight. Bad enough the poor old Queen had to deal with another one of The Duchess of Cambridge’s wardrobe malfunctions but now she needs to worry that Kate is starving her unborn child!

Angelina Jolie’s super skinny skeletal frame has caught the attention of everyone in recent photos, and friends and family are very concerned about her weight loss. Even the Queen of England thinks Angelina Jolie needs to eat a hamburger! Earlier this month Angelina Jolie visited Buckingham Palace to accept an honorary Dame award from Queen Elizabeth for her humanitarian work, now insiders are revealing that the Queen and Angie had a very candid conversation about Angelina’s eating habits. The Queen fears Prince William’s wife Kate Middleton is headed down the same path as Jolie, and multiple reports have revealed that Queen Elizabeth is unhappy with Kate’s weight – especially now that she has a royal bun in the oven.

Queen Elizabeth may be 88 years old, but she still has eyes like a hawk, and was quick to notice Angelina Jolie’s boney extremities and frail figure when she awarded her the Honorary Dame Grand Cross. According to the November 3rd edition of GLOBE Magazine an insider at the award ceremony reveals, “Angelina looked so skinny she stunned palace observers, even the Queen expressed surprise. She remarked that Angelina needed some traditional British food like roast beef and Yorkshire pudding to put some meat on her bones. I’m surprised she didn’t suggest chocolate cake, that’s the Majesty’s weak spot!”

Another witness at Angeline Jolie’s Honorary Dame Grand Cross ceremony informed GLOBE, “Angie looked like a stick insect. She’s so thin you feel a strong gust of wind could blow her over. Her long legs are pathetically bony. The flesh seems to be falling off her.”

Apparently nothing bothers Queen Elizabeth more than a woman who doesn’t take care of herself. Insiders have revealed on more than one occasion that the Queen thinks Kate Middleton is too skinny, and is concerned she has an eating disorder. Now that Kate is pregnant with she and Prince William’s second child, Queen Elizabeth has the royal team on high alert to make sure Kate is eating properly. It’s one thing for Kate Middleton to starve herself – but Elizabeth will not have her starving her unborn grandchild.

Queen Elizabeth is very prim and proper, and hardly ever speaks candidly regarding issues like one’s diet. So, the fact that even the Queen of England felt the need to tell Angelina Jolie she was too skinny and needed to start eating properly is a testament to how serious the actress’s fragile body really is. Do you think that Kate Middleton may have an eating disorder as well? Should Queen Elizabeth be concerned? Let us know what you think in the comments below!