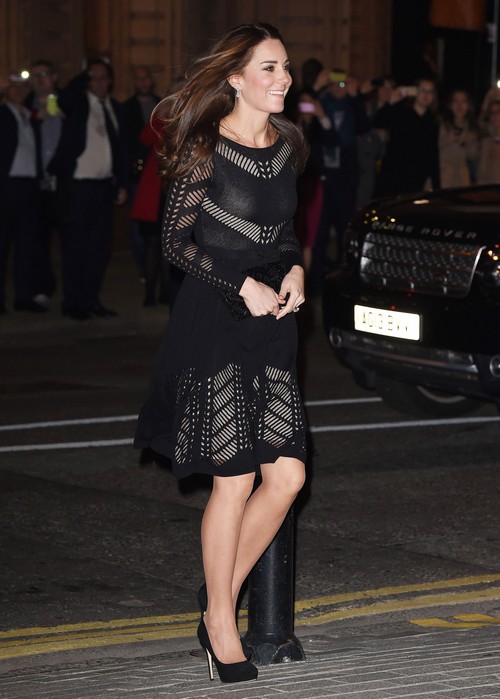 Kate Middleton is now being lauded as a fashion icon and much credit is devolving upon her stylist, Natasha Archer – unfortunately Queen Elizabeth does not approve. The Queen wants Kate to stop being so lazy and do more in her official capacity than diet, exercise and shop. Kate is expected to get more involved with the charities and foundations of which she is a patron rather rely upon being described as ‘working-behind-the-scenes,’ the palace’s favorite euphemism for doing nothing. Elizabeth also insists Kate stop fighting with Prince William and move back home to Kensington Palace after the royal couple’s public appearance in Wales this Saturday, November, 8. Camilla Parker-Bowles also is upset with Kate receiving all this attention for her appearance – but that is simply because she is jealous!

Kiss-assy reports on Kate Middleton and the royal family from Vanity Fair are nothing new, but this one hits a discouragingly low level. According to the latest VF expose on the royals [but mainly the Duchess of Cambridge we all love to talk about], Kate Middleton is a ‘reluctant’ fashion icon who never used to enjoy clothes but has now learned to love them. Apparently, Kate Middleton relies heavily on her personal assistant turned stylist turned everything else, 27-year-old Natasha Archer.

Vanity Fair’s royal sources [so Kate and her minions] explain, “Initially Kate was a reluctant fashion icon, but now she enjoys it. Tash helps source some of the clothes. She shops a lot for Kate online, and calls in hundreds of dresses for Kate to try on. She has persuaded Kate to take some more risks. The hemlines are shorter and Kate’s really pushing the boat out in the fashion stakes.”

Reluctant, my ass. Kate Middleton was NEVER a reluctant fashion icon, although calling her an icon might be pushing it. The woman is an ‘icon’ purely on the fact that she’s a Duchess married to an heir to the British Throne, not because she has any sense of style whatsoever. Her clothes are often matronly and dowdy, and she seems to wear the same outfit over and over again. In fact, the only time there was any excitement over her outfit – apart from her wedding dress and very rare occasions – has been over her wardrobe malfunctions. Plus, Kate loves her fashion, even if she’s terrible at it. We always see her shopping and buying new clothes, and for someone who’s so ‘reluctant’ about it, she sure wears a lot of top-notch designer outfits.

Also, Kate was never reluctant about anything, not just fashion. She knew what she was doing when she chased Prince William, and he finally broke down after years of pursuit. You think she’s actually ‘reluctant’ about being the Duchess and by extension, a ‘fashion icon’? Kate Middleton knew that was going to happen, and she relished it, just as she relished her years of hard work paying off.

Granted, the royals aren’t particularly enamored with her attention-stealing tactics, especially in regards to her wardrobe and wardrobe malfunctions! I’m sure that Queen Elizabeth and Camilla Parker-Bowles [albeit for different reasons] would prefer Kate’s wardrobe not to be the talk of the town, especially when she has wardrobe oopsies quite often that tend to display her royal butt.