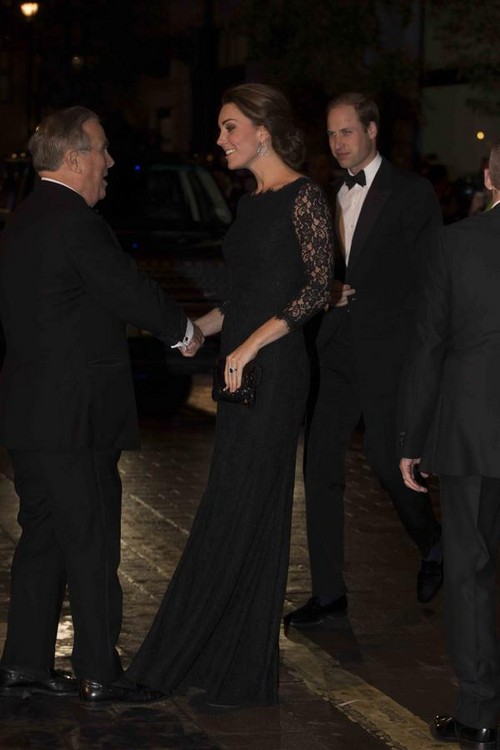 Kate Middleton is finally, FINALLY embracing her pregnancy curves, sporting a killer Diane von Furstenberg black dress while arriving with Prince William at the Royal Variety Performance at the Royal Palladium tonight. Kate usually shies away from black, sticking to neutrals like dark blue and dark grey, but this dress is quite an adventurous move on her. For one thing, she can’t suck in her stomach and pretend as though it doesn’t exist. For another, Kate Middleton is actually showing off her baby bump – on purpose! It’s a miracle, ya’ll. Now we just need Prince George to toddle around and yell at the paparazzi, and the miracle will be complete.

In all reality, Kate and Will did make it a point to pose for the photographers at the Palladium, arm in arm. Either they’re being extra touchy feely after a few glasses of wine, or they’re under strict instructions from Queen Elizabeth to suck it up and play happy. So of course, that means hand holding, eye glaring, hands running through the hair, and all the typical signs of PDA on a big date. It’s like they want us to root against them, no?

Anyway, both Prince William and Kate Middleton smiled plenty of the cameras, but this is just a build-up to their big event next month, when they travel to NYC and unveil their new wildlife charity. And let’s hope Kate Middleton is still feeling as comfortable with her baby bump, even though I have a feeling that she’ll revert back to her boring, stodgy skirts once her initial feelings of adventurousness come to pass.

For our added amusement Kate and Will met with One Direction and Prince Harry asked the Princess about her baby bump. From Twitter – Harry Styles said after meeting Kate: “I said congratulations on the bump. (Though) she didn’t look bumpy“

What do you guys think of Kate Middleton’s dress? And of the royal couple’s joint appearance at the Palladium? Let us know your thoughts in the comments below.