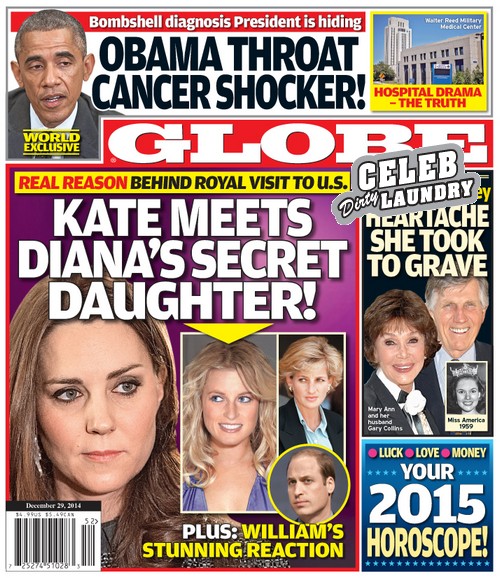 The Royal Family owns dozens of properties all over England, and they need every square foot of them to hide all of the skeletons in their closets. It has been nearly two decades since Princess Diana’s tragic death — yet the scandalous life she lived continues to torment Queen Elizabeth, Kate Middleton, and Prince William – in fact ALL of the Royal Family. Princess Diana’s rumored secret daughter is once again in the crosshairs of a media firestorm.

The cover of the December 29 edition of GLOBE Magazine reveals, “Real Reason Behind Royal Visit To The U.S. – Kate Meets Diana’s Secret Daughter! Plus: William’s Stunning Reaction.” This isn’t the first time that stories have popped up about Princess Diana’s secret daughter — who has been in hiding for many years. Rumors ran rampant for many years, and in 2012 a shocking tell-all book was released regarding the sister of Prince William and Prince Harry (see photo). Considering the fact that Kate Middleton is pregnant with Prince William’s second child – it makes sense that she wants to get to know the other half of her husband’s family, her children’s family. Is that the real reason Kate was tagging along with the Prince and visiting New York City? It certainly wasn’t to wrap gifts!

GLOBE always has the juicy details on the Royal family, and what they are really up to – the exciting stories that other media outlets are leery of running. One thing is for sure, the fallout from Kate Middleton and Princess Diana’s daughter’s secret rendezvous is going to be huge! Queen Elizabeth and Camilla Parker-Bowles are sure to be furious with the Duchess of Cambridge, and drama will ensue.

Why do you think Princess Diana’s secret daughter has been in hiding this all time? Why did Kate Middleton meet with her? How will Queen Elizabeth and the wretched Camilla Parker-Bowels react? Let us know what you think in the comments below, and as soon as this week’s GLOBE hits the newsstands we will be running out and getting a copy so we can dish on all of the juicy details.