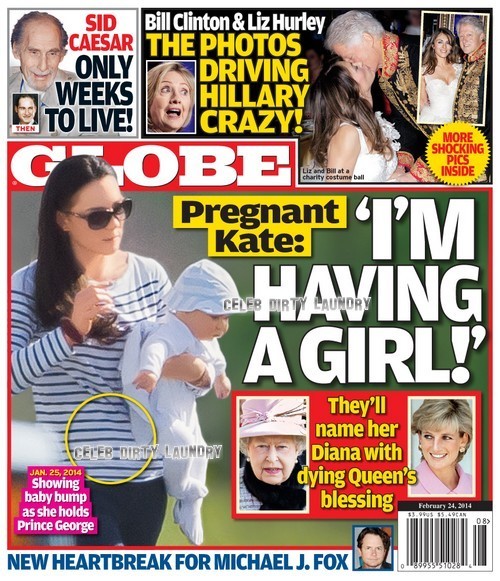 After hearing of Kate Middleton and Prince William’s stand off over baby number two, could she really be pregnant? It’s amazing how two completely different stories about the same person can circulate at once isn’t it? Last we knew, William has dug in to his 10 week agriculture course at Cambridge while Kate has kind of been playing the role of a single mama. She even took little Prince George away with her on her family’s yearly trip to Mustique while William stayed behind.

According to the Feb. 24th print edition of GLOBE Magazine Kate is not only pregnant, but expecting a girl. What’s also fascinating is that Queen Elizabeth has agreed to the baby girl being named Diana after William and Harry’s beloved mother. What we do know for certain is that William has been leaning on Kate to have another baby a bit sooner than planned because he wants to make dying Queen Elizabeth happy. In recent weeks William has also found himself knee-deep in a power struggle with Prince Charles.

It was no secret that Elizabeth had preferred the idea of William and Kate on the throne next and at first Charles was kind of okay with the notion. Then his wretched wife, Camilla Parker-Bowles, started threatening to unload all of Charles’ dirty secrets in the press if he didn’t fight for his birthright. Bingo, we quickly saw him step up and start to take control of things. He even eliminated Kensington Palace’s press office which exclusively handled anything related to William and Kate. That move basically silenced the young couple.

William believes that if they announce another pregnancy then Elizabeth may rethink allowing him to ascend to the throne ahead of his father. Could Kate have reluctantly agreed in spite of wanting to enjoy her son and her health for a bit longer before getting pregnant again?

Also in the latest issue you can learn about Michael J. Fox’s latest crushing situation and also Hillary Clinton’s reaction to those photos of Bill Clinton with Liz Hurley. Do you think anything happened between them for real or did Tom Sizemore dream it all up on one of his well-documented drug binges?

GLOBE’s marvelous ability to get inside the palace and right to the direct sources makes them number on Royal news. I can’t wait to read the exclusive report on Kate’s pregnancy details and how this will affect the royal family’s power struggle. Once I’m done here for the day I’ll get my copy of GLOBE and have a wonderful evening reading the latest in top news reporting!