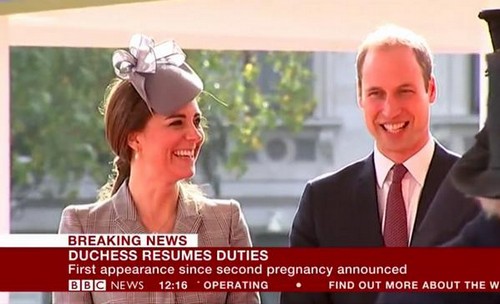 On the evening of October 15 Prince William and Kate were photographed leaving a medical clinic where they had just had Kate’s 12-week pregnancy scan and various test including those that can determine the baby’s gender at this point. As they rushed to their waiting car smiling from ear to ear, Will clutched a yellow envelope that no doubt contained a confirmation of the sex of their unborn baby.  Sources have confirmed that the reason Kate and Will were so ecstatic when they were leaving the clinic was because sources say that Dr. Alan Farthing confirmed to them they were having a daughter, yes a baby girl.

Since Will and Kate confirmed they were expecting baby number two, Royal Family insiders revealed that the couple was torn between three possible names if the baby was a girl.  Will and Kate originally planned on naming the baby Margaret after Queen Elizabeth’s sister, Princess Margaret. However, Prince William desperately wants to honor his late mother Princess Diana. Queen Elizabeth is livid, and doesn’t want her grandchild to be named after Diana which will bring up all the horrid scandal associated with Princess Diana’s ill-fated marriage to Prince Charles. Don’t forget the long-term cheating affair between Prince Charles and Camilla Parker-Bowles and the eventual divorce between Charles and Di which almost brought down the monarchy. Of course Camilla Parker-Bowles wants the baby girl named ‘Camilla’ but that is never happening. One thing is for sure, the future name of Will and Kate’s baby girl is slowly tearing apart the Royal Family.

So, which name do you think Will and Kate will go with? Marguerite, Diana, or Elizabeth? If the royal couple name their daughter after Diana, could it ruin their chances of Queen Elizabeth handing over her throne to them instead of Prince Charles and Camilla Parker-Bowles? Will the Royal Family be able to bully Prince William and Kate Middleton into not naming their daughter Diana?  Let us know what you think in the comments below!

Update: The Office of Prince Charles at Clarence House, officially announced October 20 that the princess due date is in April:

“Their Royal Highnesses The Duke and Duchess of Cambridge are delighted to confirm they are expecting a baby in April 2015,”

“The Duchess of Cambridge continues to be affected by Hyperemisis Gravidarum, but her condition is steadily improving.”

While Clarence House did not specify the gender of Kate and Will’s baby we are confident that it is a girl.