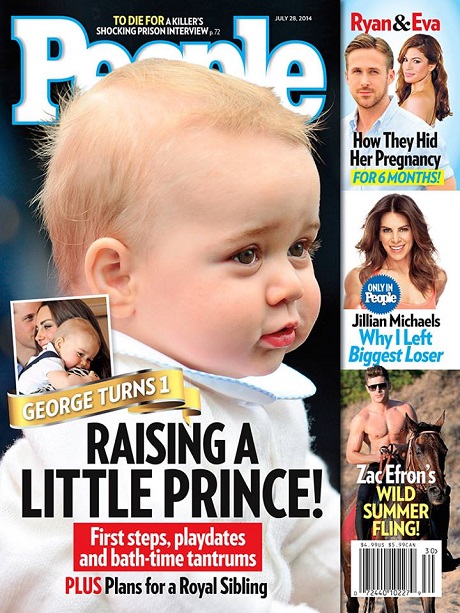 Can you believe Prince George is already turning one? It seems just like yesterday we were all up at three in the morning sipping hot tea as we watched the royal wedding. Then we were glued to the TV for days wondering when the royal baby would arrive and placing bets on what his name would be. Prince George is now turning one and he is currently People Magazine‘s cover story.

The magazine recaps the toddler’s first year milestones, memorable moments, and reveals what life’s really like for the little prince. Prince George’s first year included a trip to Australia and spending quality time with mom and dad. Moments such as singing “Row, Row Row, Your Boat” with Kate and listening to rock music on the radio with William during early morning feedings are recalled.

“As for any new parent, it’s exciting and a joy to be a part of. It’s a wonderful thing going through your baby’s first year,” a palace source told People.

Rumors have been swirling for weeks that Kate Middleton is currently pregnant with baby no. 2 but there has been no official statement. But it looks like Prince George will be a big bro in the near future. The source revealed the royal couple is planning for another child but added, “they don’t say when.” Could imagine a mini Kate running around or could we have William and Harry 2.0?

People also noted that William is preparing to start a long-term job with an air ambulance service near their home, Anmer Hall.

Friday’s issue of People will have more exclusive details into Prince George’s first birthday. What are your thoughts on the royal birthday? Are you ready for another royal baby? Join the conversation and leave a comment.