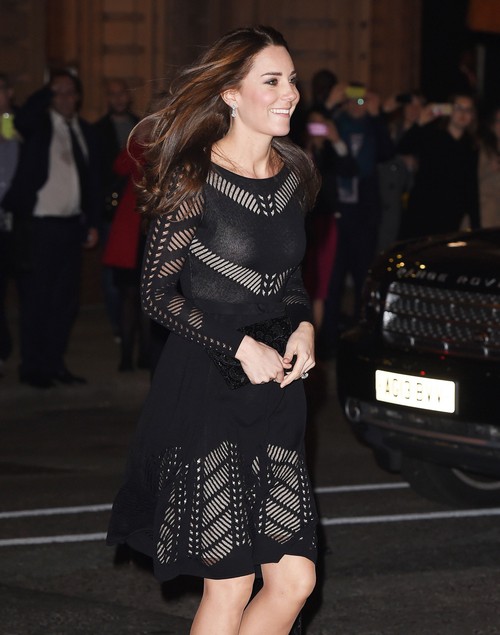 Is Kate Middleton pregnant with twins? After the Royals confirmed Kate Middleton and Prince William were pregnant and expecting baby number 2 in September, a media circus ensued, and everyone was certain that William and Kate were having not one, but twin Royal babies, sources were even leaking the twins’ reported names.

However, once the circus quieted down and the smoke cleared – we all pretty much accepted the fact that the odds of Kate Middleton having a set of twins were slim to none. And, the Palace even confirmed that Kate is pregnant with a “baby,” not “babies.” Generally when someone is pregnant with twins, their baby bump emerges very early on in the pregnancy. And, after weeks of bed-rest after battling severe morning sickness, Kate Middleton returned to the public eye on October 23rd and her baby bump was barely visible. If she was 3 ½ months pregnant with twins, she should not be as tiny as she is now, and should be sporting a much more noticeable baby bump. Check the photos below and you can barely notice a baby bump, let alone a baby bump holding twins.

New rumors are still emerging, and insisting that Kate Middleton is pregnant with twins and two babies were spotted when she went to her ultrasound and pregnancy scan. Prince William and Kate were both photographed smiling ear to ear when they left the ultrasound, so there is a small chance that they learned they were having twins after all – and that is why they were so excited. In fact the excitement the couple showed is because Kate is pregnant with a baby girl and both Prince William and The Duchess of Cambridge have expressed their desire to have a daughter. At this point you probably shouldn’t wager any money on Kate Middleton being pregnant with Royal twins.

So, do you think Kate Middleton is pregnant with twins? Shouldn’t her baby bump be bigger if she is? Or, are you betting she only has one bun in the oven? Let us know what you think in the comment section below!