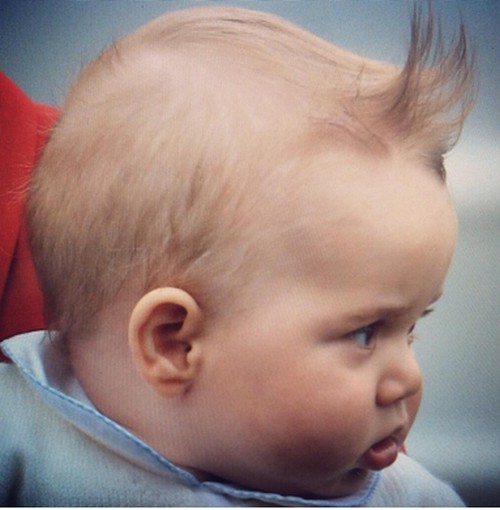 Prince William and Kate Middleton have officially begun their highly anticipated historical tour down under. The Prince and Duchess were photographed yesterday, Monday April 7th, arriving at Wellington Airport in New Zealand. Paparazzi photographed The Royal family as they exited their private plane and were greeted by Prime Minister John Key, Mayor Celia Wade-Brown, and Commander Richard Walker.

Duchess of Cambridge Kate Middleton emerged from the Royal family’s plane carrying Prince George, who made his first public appearance since his Christening back in October. 8 month old George rocked a crème colored sweater, white shorts, and adorable little white shoes. The active and healthy baby cooed and giggled, as the Duchess carried him, thoroughly enjoying the photo-op. (Of course George’s new nanny Maria Teresa Turrion Borrallo was also in tow.) Some of the photos of young Prince George that were taken yesterday in New Zealand have already gone viral, and are the talk of the internet.

These adorable photos of Prince George are just the beginning. Tomorrow George will be present at an event with his parents Prince William and Kate Middleton, and there will surely be photos snapped of him. Kate and William are scheduled to spend the afternoon with nurses, parents, and children of the Plunket parents’ group. Rumor has it Prince George will be let loose and allowed to interact with other small children his age, which will definitely make for great pictures.

So, on a scale of 1-10 how cute do you think the youngest member of the Royal Family is? Do you think Prince George stole the show?