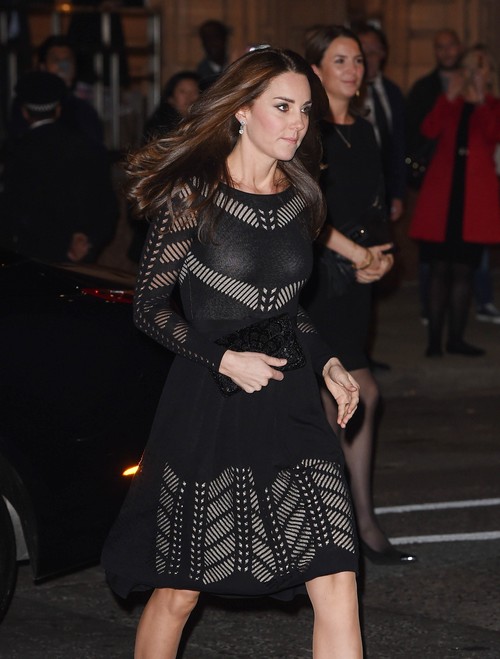 Kate Middleton made a great show of her public appearances this past week marred only by a single underwear wardrobe malfunction. Not bad for The Duchess of Cambridge! Nevertheless Queen Elizabeth and Camilla Parker-Bowles are mighty pissed of at the pregnant princess. Although Prince William fighting rumors have been dispelled pregnant Kate is still hiding out at her mother’s house at Bucklebury. Kate Middleton might be feeling better after dealing with a severe bout of acute morning sickness, but that doesn’t mean that she’s out of the woods just yet. According to a new report from OK! Magazine, Kate has completely ditched Kensington Palace and her private army of doctors for the same comfort of her mom’s Bucklebury home.

As we’ve reported over the past week, Kate Middleton is reportedly staying with her parents, Carole Middleton and Michael Middleton, at their Bucklebury home. A part of this could be due to Kate’s insistence on avoiding the media exposure of living in Kensington and/or living in London, but methinks she also wants to avoid palace sources leaking the details of her health or any fighting with Prince William to the media.

Kate does have Prince George at her side, and although there were rumors that she was fighting with Prince William, those were debunked fairly quickly. Prince William is visiting Kate and George at Bucklebury as often as he can, and Kate’s getting all the medical help she needs without dealing with any of the extra harassment. OK!’s source even adds, “She’s extremely close to Carole, who is a hands-on grandmother. Between Carole and their nanny, Maria [Borallo], Kate has all the help she needs.”

Now, even though Kate is still at Bucklebury, it’s only a matter of time before she’s forced to move back to Kensington. Most experts claim that Hyperemesis Gravidarum lasts until the end of the first trimester for most women experiencing the illness, and Kate hasn’t yet reached that point yet. She’s doing a lot better, but a lot better does not equal 100% strength. It’s better for her to stay at Bucklebury until she feels completely normal again, not just for the sake of her health but also the sake of reducing media gossip, especially after her underwear wardrobe malfunction. However, it’s just a few more weeks until the end of her first trimester, and that not only means a return to her normal royal duties, but also to her normal residence. And for the  moment, that’s still Kensington Palace.

Update: There is now talk and rumors that The Duchess of Cambridge might be having a baby boy! We are currently working with out exclusive palace sources to determine if the rumors we’ve heard that Princess Kate may be having a baby boy rather than a girl as previously reported are valid. We will update this post and report on what we learn as soon as possible.