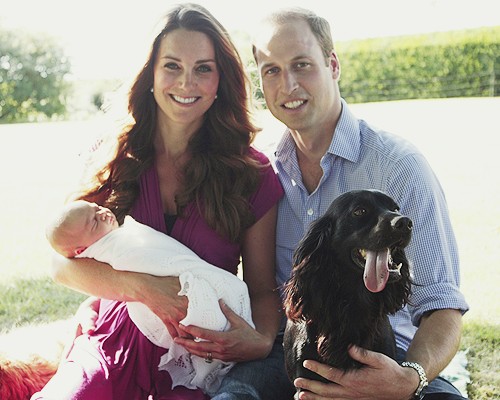 Long before they had a little son crawling around the palace, Kate Middleton and Prince William were completely obsessed with their dog, Lupo. Kate was always spotted walking the cocker spaniel and he truly seemed to be treated like their first baby. Even in their first official photo taken with Prince George, Lupo is there, being held by William as Kate cradles their newborn. In recent months though, the dog is no longer with the couple.

According to the Feb. 3rd print edition of Life & Style magazine, Lupo has not been seen even once at Kensignton Palace. He was also left out of the royal family’s holiday festivities because Queen Elizabeth feared that he would clash with her prize corgi’s. So where is Lupo? Well, Kate’s brother has been spotted walking the pooch so he is still in the family at least. I have to wonder why he isn’t at the palace. Did the Queen make it clear that he couldn’t come along? Or did Lupo maybe get aggressive with the baby and find himself ultimately banished?

Kate and William hardly seemed to think of him as a temporary pet so something big must have happened for them to let him go from day to day life, don’t you think? Is Lupo now living full time with Kate’s brother and if so, do you think it’s permanent? Did Kate know in advance that she was going to have to leave someone else care for her dog or did something happen that made it impossible for Lupo to stay with her and William? Tell us your thoughts in the comments below!