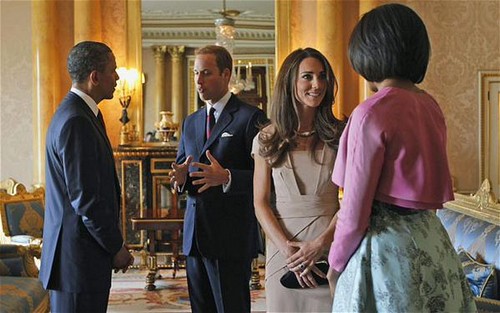 Kate Middleton is having a baby daughter, but the biggest controversy surrounding the situation is the name of the second royal baby and first girl for the royal couple. When it came time to naming Prince George, both Kate Middleton and Prince William went modern without foregoing tradition. However, sources are telling us that Kate Middleton is determined about what to name her baby daughter, and it’s something that Prince William, Camilla Parker-Bowles, and Queen Elizabeth aren’t happy with.

Apparently, Kate wants to name her daughter ‘Margaret Elizabeth’, after Queen Elizabeth’s deceased sister and the Queen herself. However, the Queen is reportedly more keen on something even more traditional, such as Victoria. But the Queen’s ire is nothing compared to Prince William’s upset or Camilla’s anger. According to the reports, Prince William had been very keen on putting a Diana in the name somewhere, to honor his dead mother. The problem is that there are decades of controversy surrounding Princess Diana, Prince Charles and former mistress Camilla Parker-Bowles thus Queen Elizabeth has forbidden Kate and Will to even consider using her name. Of course Prince Charles and Camilla would have an apoplectic fit if “Diana” was any part of the new baby girl’s name.

Of course, Camilla Parker-Bowles always feels like she’s obligated something from the royals, and as such, is probably furious that she doesn’t see the name Camilla in there anywhere. Granted, anyone who knows the royal family shouldn’t be shocked at this turn of events. The enmity between Camilla Parker-Bowles and Kate Middleton has existed for a long time, but even then, who actually thought the royals were seriously entertaining putting Camilla in their daughter’s name? Puh-lease, hell would freeze over first.

What do you guys think? Should the royals name their daughter Margaret Elizabeth? Should they add Diana in there, to honor Princess Diana? Should they acquiesce to Camilla Parker-Bowles’ ridiculous requests and add Camilla in there? Or should they surprise everyone and go with an unexpected choice? How about “Minnie Pearl?” Let us know your thoughts in the comments below.