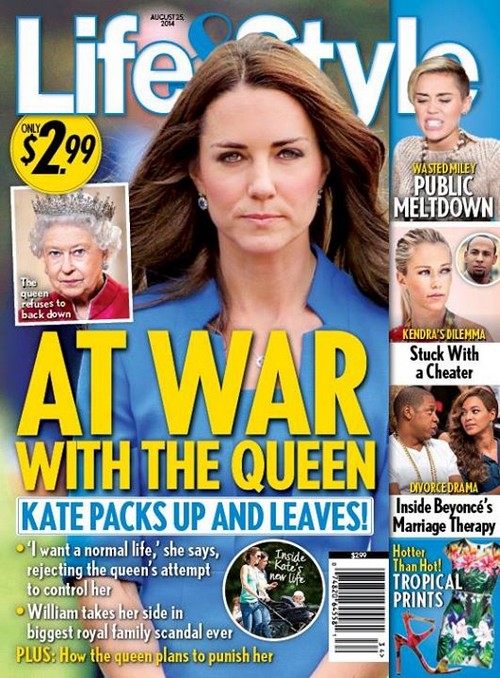 Kate Middleton has apparently had enough of living in close proximity to Queen Elizabeth and the royal family. She and Prince William moved back into Kensignton Palace last fall so that they could be closer to the family and raise their newborn son smack in the middle of royalty instead of it being a good decision Kate especially has found herself constantly under fire. First it was Camilla Parker-Bowles, Prince Charles’ wife who has never tried to hide her jealousy towards Duchess Kate. The fighting and nit picking has reached epic proportions leaving Kate exasperated at the idea of having to deal with drunk Cami on the regular.

As if she wasn’t under enough stress we are hearing that Queen Elizabeth may have helped usher the monarchy into a more modern age but her parenting style remains in the dark ages. According to the Aug 5th print edition of Life & Style Magazine Elizabeth and Kate are at constant odds over how Prince George should be raised and Kate has finally pulled the trump card. She and William are packing up and preparing to move into their Anmer Hall country home- for good. Kate wants peace for herself and her family and she finally understands that it’ll never happen if they are residing in London. Instead she is investing in a country lifestyle and contemplating home schooling her kids.

While Kate and William’s marriage seems to be rock solid not everyone else in Hollywood is as lucky. Hank Baskett cheated on Kendra Wilkinson with a transsexual model a few months back and after what looked like a clear cut split there are rumblings that these two may be trying to patch things up. Kendra and Hank threw a bar b que last weekend for friends and family and sources say it was very much a joint venture. Then there’s Jay-Z and Beyonce. What exactly is going on in their marriage counseling sessions? Well Life & Style has the inside track on how these two are really doing. Do you think that Jay and Bey will separate in the next few weeks as has been widely speculated? Tell us your thoughts in the comments below!