Keeping Up With The Kardashians Live Recap 2/16/14: Season 9 Episode 5 “A Surprise Engagement Part 2”

BY Amanda Austin on February 16, 2014 | Comments: one comment
Related : Keeping Up With The Kardashians, Reality TV, Recap, Television 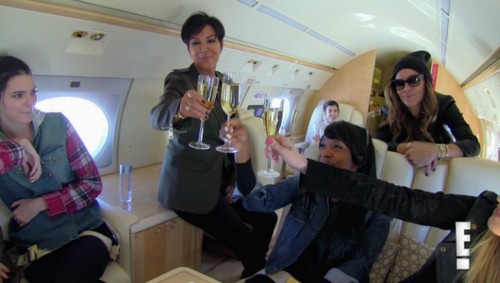 Keeping Up With The Kardashians continues tonight with a new episode called, “A Surprise Engagement Part 2.”  On tonight’s episode the surprise engagement party for Kim and Kanye concludes.  Did you watch last night’s first night of the 2-part episode?  We did and we recapped it right here for you.

On last week’s episode the family heard about a surprise Kanye was planning for Kim’s birthday. Kris went into panic mode when she learned Kim’s house was delayed and Kourtney & Khloé plotted revenge on judgmental Kim.

On tonight’s episode the family gathers in San Francisco to surprise Kim on her birthday but the real surprise is Kanye proposing to Kim.  Kris knows all about it but she is not letting the cat out of the bag. Meanwhile, Scott heads to New York to spend time with his father and sick mother.

Tonight is going to be another crazyepisode that you won’t want to miss, so be sure to tune in for our live coverage of E!’s “Keeping Up With The Kardashians” tonight at 9PM EST! Meanwhile, while you wait for our recap hit the comments and let us know how excited you are about this season of KUWTK?

Tonight’s episode of Keeping Up With The Kardashians starts off with Kim telling Khloe and Kourtney that Kanye wants her to go to San Francisco for her birthday, she doesn’t want to go because she doesn’t want to leave North behind. Kim is completely clueless, and has no idea her entire family is coming.

Kris is stressed out about trying to get her family to San Francisco without anyone noticing. They have to use SUV’s with tinted windows, a private plane, and make sure that no one tweets or Instagrams pics of them en route to San Francisco.

Scott has opted not to join the Kardashians in San Francisco for Kim’s surprise party. He is going to go to the hospital and check on his Mom and Dad, his Dad hasn’t left the hospital in three weeks.

Kris, Kourtney, Khloe, Kendall, Kiley and some of their family and friends are en route to San Francisco in a private plane. The Kardashians finally arrive in San Francisco, and Khloe receives a phone call from Lamar. They are trying to get to their hotel, but people keep recognizing them and trying to take pictures at red lights. They are scared that someone is going to go on Twitter and spoil the surprise party. Kim still has no idea that her entire family is in San Francisco.

Scott is trying to reason with his Dad, he is annoyed because he isn’t eating right and taking care of his blood sugar levels. With everything that happened to his Mom, he doesn’t need his Dad in the hospital too. Scott’s Mom has taken a turn for the worse and she had a seizure.

Khloe and her sisters are all getting ready in the hotel room when they start receiving text messages from Kim, she is saying that she is sick and throwing up, and she still hasn’t left Los Angeles. They are scared she isn’t going to make it to San Francisco and ruin the surprise party.

All of Kim’s friends and family pile into a private bus and head to a stadium. They are shocked when they find out that Kanye rented an entire stadium. They walk into the stadium and see hundreds of people, Khloe doesn’t even recognize half of the people. She does recognize Lorraine Schwartz, a ring designer from NYC that flew all the way to Cali for the party, she is starting to realize that it really might be a surprise proposal.

Kim and Kanye are ten minutes away, all of the party guests head out to the baseball field. They are all going to hide in the dugouts in the dark so that Kim doesn’t know they are there. They are shocked after they climb into the dugouts and realize that there is an orchestra of 90 people on the field. A car drives onto the field, and everyone stops talking and moving so that Kim doesn’t know they are hiding in the dugouts.

Kim and Kanye step out of the car, and she is blindfolded. Kanye removes the blindfolds, and the orchestra begins playing and the lights come on. Kim still has no idea her family is hiding the dugout. Kanye gets down on one knee and proposes, and Kim says “yes.” After Kim says “yes” all of Kim’s friends and families come running out of the dugouts and surprise her.

Scott calls Kourtney after the party and tells her that his Mom is in really bad shape. She is on kidney dialysis, and still is not awake. He is stressed out because he knows his Dad is not following his diet and taking care of himself.

Kourtney is realizing that Scott’s Mom may not pull through, so she is packing to head to NY to be with Scott and his family. Scott doesn’t want Kourtney to come to NY, but Khloe thinks she should just pack up and go anyways.

The next day is Kanye’s concert in Vegas, and Kim has invited her entire family. She wants to have one last “family thing” before she and North head out on tour with Kanye. Kourtney is shocked to see Scott in Vegas at the concert, she thought he was still in NY with his Mom. It turns out that Khloe had helped Scott get to Vegas, so that he could surprise Kourtney. Kourtney plans to go back to NY with Scott after the concert.

Bonnie Disisck died the day after Kanye’s conert in Las Vegas, Scott and Kourtney made it back in NY in time to be by her side.