Keeping Up With The Kardashians Live Recap: Season 9 Episode 19 “Secrets of a Double Life” 8/17/14 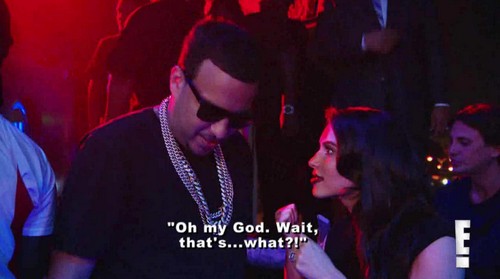 Keeping Up With The Kardashians continues tonight with a new episode called, “Secrets of a Double Life.” On tonight’s episode Kim and Kourtney work to find out what’s going on with their sister; Kim moves out of Kris’s house.

On the last episode, Kourtney helped Khloé decorate her house, but Khloé got upset when she received a hefty bill for her sister’s services. Meanwhile, Kris helped her mom overcome her fear of using medical marijuana, but when Bruce found out he got angry and wanted the stuff out of his house. Did you watch the last episode? If you missed it we have a full and detailed recap, right here for you.

On tonight’s episode when Khloé appears to be living a secret life with a new group of friends and a guy, Kim and Kourtney make it their mission to get to the bottom of things. Meanwhile, a determined Kris wants to help plan Kim and Kanye’s wedding, but risks upsetting her daughter by doing so.

Tonight’s episode of Keeping up With The Kardashians begins with Kim hanging out with Mason at Kourtney’s house. Kim and Kourtney are stalking pictures of Khloe on the internet, they had no idea Khloe was dating French Montana. Kourtney thinks Khloe is “shady” because she never talks about her friends or guys she is hanging out with. Kim is shocked because French isn’t black, he’s Moroccan, and she has never dated a guy that wasn’t black before.

Later Kim shows Kris, Kourtney, and Scott her wedding book and where she plans to have the wedding and what invitations she wants to order. Kris tries to offer her opinion, but Kim informs her that she doesn’t know what she is talking about and she has never even met her wedding planner. Kris offers to throw the a party in Paris for Kanye and Kim, but Kim informs her they won’t have enough time.

Khloe just got done guest-hosting Chelsea Lately, and she is backstage and her mom Kris still hasn’t showed up. She calls her phone over and over but Kris doesn’t answer. Khloe has had enough of Kris’s unfair management, and she thinks that Kris works way harder to represent her sisters than she does her. Afterwards Kourtney and Kim head over to Khloe’s house and try to talk to her about her “new crew” but Khloe won’t tell them anything about who she has been hanging out with.

The next day Khloe meets with her design team to go over her new house, and Kris shows up half an hour late. Khloe tries to walk through the house with her mom, but Kris heads out to another room to talk on her phone. She tells Kris to get off the phone and tries to show her the fireplace, but Kris tells her she has to leave. Khloe rants to her friend Malika that she is sick of Kris not making her a priority.

Kim corners Kris and asks her if she booked Kendall and Kylie’s trips to Paris for her wedding. Kris gives her the cold shoulder and complains that she can’t throw a party in Paris. Kim finally caves and says that Kris is allowed to host a small dinner in Paris before the wedding.

It’s Mother’s Day or Khloe decides to cook a dinner with the whole family for Kris. While Kris is outside bragging to Scott about all of the stuff that she booked for Kendall. Khloe comes outside screaming at her mom about a radio interview she booked for her. Khloe just got the questions and they are all about her divorce and whether she will get married again, she flips out on Kris for not proofing the questions before booking the interview. She threatens Kris that she is “going to find someone else to run her shit” because she is sick of her not protecting her like she does the rest of the family. She argues that her Mom and her manager should have her back. Bruce shows up for dinner in the middle of their screaming match. Kris heads back outside and vents to Kim about how nothing she does makes Khloe happy.

The next day Kim heads to a photo shoot for HYPE Energy drinks. While she is on break during the shoot, and she realizes that her mom has a ton of her wedding details that were supposed to be private. Her wedding planner says that Kris “conned” the details out of her, and lied that she already knew.

Meanwhile, Khloe meets Kris for lunch and apologizes for screaming at her. She stresses that she isn’t sorry for what she said though, she wants Kris to protect her, and not exploit her. Kris feels bad because she knows Khloe is really vulnerable right now because of her divorce.

Kim confronts Kris about meddling in her wedding, and tells her once again that she and Kanye want to plan everything on their own. She is sick of Kris butting in, and she announces that now she isn’t allowed to throw a bridal shower in Paris, and she is going to move in to Kourtney’s house. Kris tells Kim she is just being “mean and dramatic.” Kim doesn’t want to hear it though, she is sick of living with Kris because it is so overwhelming.

Later Khloe heads over to Kourtney’s house, and Kourtney gives Khloe the third degree about her random trip to Las Vegas. She asks Khloe if she was ever dating someone would she tell her? Khloe argues that her family is judgmental, so she doesn’t like to introduce all of her friends to them. Kourtney is annoyed that Khloe is being so secretive.

The next day Kim shows up at Kourtney’s house with her suitcase and moves in to her spare bedroom. While Kim is unpacking, Kris starts blowing up Kourtney’s phone and demands to talk to Kim. She yells at Kim to “stop playing games with her.” Kim hangs up on her, and Kris calls over and over but they ignore her.

Khloe goes bowling with Kourtney and her friend Khadija. Kourtney jokes that Khloe hasn’t been to bed yet and she’s still drunk from handing out with her “new crew” last night. Kourtney starts quizzing Khadija about who Khloe has been hanging out with.

Later Kourtney tries to convince Kim to go over to Kris’s house for dinner, she wants them to squash their fight. Apparently now Kris is threatening not to come to her wedding because she moved out. They head over to Kris’s house for dinner and Kim apologizes for being so dramatic, and then they begin bickering all over again about Kris “butting out” of their wedding plans. Kim finally convinces Kris to “just go with the flow.”

Kim and Jonathan decide to take matters in to their own hands, and go to a club where French Montana will be appearing because they know Khloe is there. They stake out the parking lot waiting for Khloe to show up with French, but they are confused because when Khloe pulls in to the parking lot, Lamar suddenly shows up as well.

Kim and Jonathan start freaking out, and get out of the car. They rush to Khloe’s car and she is stressed out, and shocked to see Kim at the club. They are surrounded by paparazzi and Khloe doesn’t know if she should even get out of the car. French Montana’s manager says that they aren’t going to let him in because they don’t want any drama. Khloe feels bad that Lamar got denied at the door, and she finally heads in to the club with Kim, Jonathan, and French. Kim finally gets to talk to French and meet Khloe’s “new crew.” Khloe is glad that Kim chose tonight to stalk her, because she was able to help her with the Lamar situation.