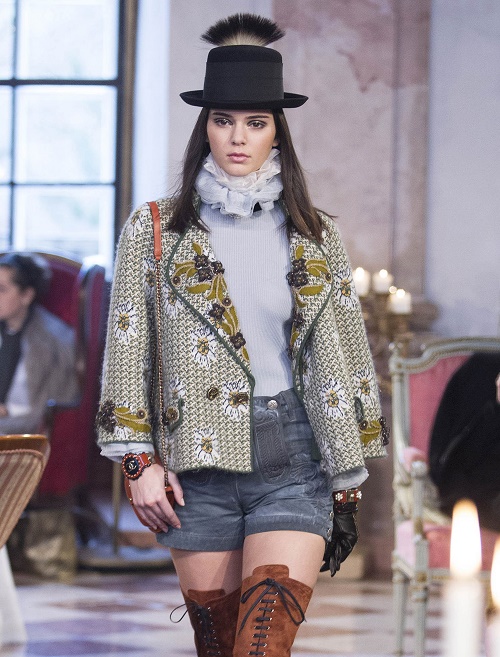 Kendall Jenner has a new boyfriend, and is officially dating controversial rapper Chris Brown, because apparently her flirtationship with fellow model Cara Delevingne wasn’t satisfying. Kendall and Kylie may be Bruce Jenner’s daughters, but they clearly inherited the Kardashian women’s horrible taste in men.

Kim Kardashian’s wedding record speaks for itself, Kourtney picked probably the hottest mess available to have three children with, and Khloe can’t seem to decide if she wants to be with French Montana — who is clearly using her for her fame — or Lamar Odom, who is clearly using something. So, considering the women that Kendall is surrounded by, we’re not exactly shocked that she has been hooking up with convicted felon and woman abuser Chris Brown.

The December 29th edition of OK! Magazine reveals, “Over the summer sources say that Kendall was a ‘permanent fixture’ in the studio where Chris Brown was recording with Tyga, and things heated up from there. In July Chris hosted a charity kickball team and picked Kendall to be his team’s “coach.” Then in August, when she was in an early morning crash, witnesses ID’d Chris as her passenger. Now, sources say “Chris is smitten and Kendall is eating it up!”

This isn’t the first tie Kendall has been linked to Chris Brown, and considering the fact that he and Karreuche Tran’s never-ending saga appears to have finally ended, it’s not hard to believe that they are dating. The thing we’re having a tough time buying, is Kendall has been distancing herself from the Kardashians so that she will be taken more seriously as a model, isn’t dating jail bird Chris Brown just as damaging to her career? Do you think Kendall and Chris make a cute couple? What do you think about Kendall Jenner & Chris Brown dating? Let us know what you think in the comments below!