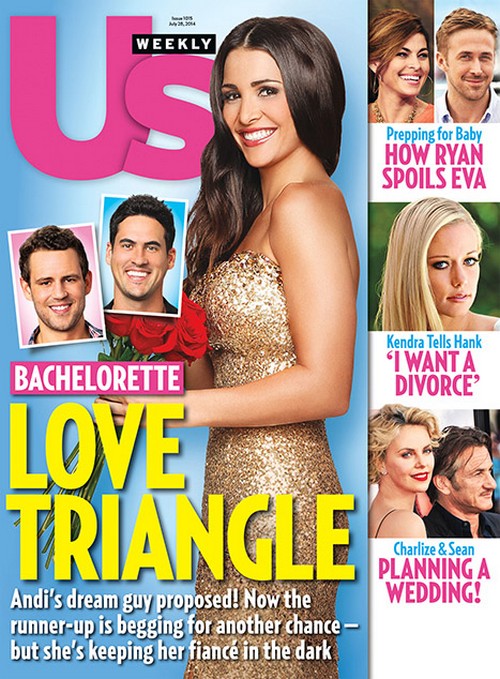 Kendra Wilkinson is secretly jumping all over the place, ecstatic that she’s made the cover of US Weekly. Ok, I’m kidding. Except not really.

See, Kendra’s husband Hank Baskett just cheated on her, and the affair has gained even more attention because he reportedly cheated with a transgendered model. Barring the lurid and ridiculous details of the affair, sources close to the couple have been saying that Kendra’s known about Hank’s affairs for a very long time. Yeah, you read that correctly – affairs with a capital S. Hank has cheated before, and Kendra knows about it. In fact, I wouldn’t be surprised it they actually had an open marriage, but the cat’s out of the bag now.

Granted, this affair has gotten Kendra back into the spotlight, so she’s not going to [privately] complain. Publicly? It’s another story. If Kendra is on US Weekly, it’s because she and/or her team spoke to the magazine and told them what to write. The report claims that Kendra is demanding divorce, which is the most ridiculous thing I’ve heard all day. You think Kendra’s going to get rid of the her one claim to fame right now? She’s going to milk this scandal for everything she’s worth, a la Tori Spelling. And just like Tori Spelling, she’ll somehow capitalize on this nonsense and land herself a ridiculous reality show. Then, we’ll be stuck with staring at her face for the next year, at least until the ratings plummet for the show and it gets cancelled.

But divorce? Puh-lease, don’t make me laugh. Kendra is a reality star, and reality stars are the best famewhores in the business. When life hands them a golden opportunity like this, they never, EVER give that up.

US also has a story on how Charlize Theron and Sean Penn are planning a wedding, and if that wedding happens to be their own wedding, I will keel over in shock. Plus, where would we be without a PR-approved slant on this week’s biggest story, a.k.a. Eva Mendes getting impregnated with Ryan Gosling‘s baby.