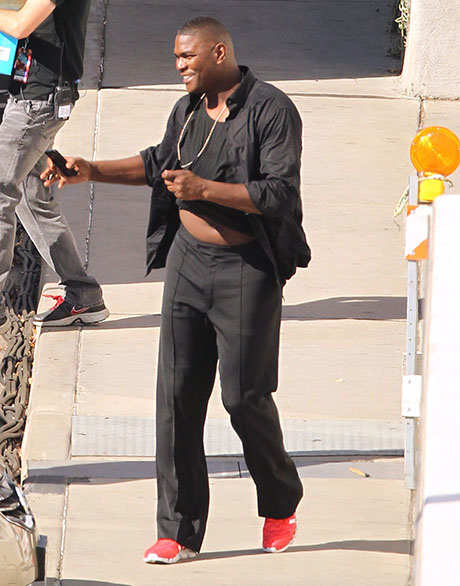 Keyshawn Johnson, former wide receiver in the NFL, was arrested early Monday morning after being involved in a fight with his ex-girlfriend. The fight eventually escalated and things got physical. Sources claim that Keyshawn broke his ex-girlfriend’s phone, an event that left her with a gashed/cut hand. The two reportedly had an on-the-rocks relationship, one constantly up and down, and were supposedly arguing about marriage. Perhaps Keyshawn wasn’t feeling the idea of a future marriage?

Johnson was arrested after being charged with misdemeanor domestic battery; he was then booked and sent to jail. Bail was set at 20K, which was easily taken care of, and he’s now out.

Keyshawn has a history of being rather loud and always manages to get heard. When he was living in Justin Bieber’s neighborhood, Key had absolutely no problem letting the young pop star know that he was being annoying. In fact, Key almost started a fight with a few of Bieber’s hulky bodyguards. Now, we’re not sure who would’ve won in that duel . . . . but Key’s temper might’ve allowed him to come out on top.

Let us know in the comments section below what you think of this incident involving Keyshawn and his ex-girlfriend. It seems like there have been a lot of celebs involved in domestic violence disputes as of late. Anger management courses for the entire celeb world, please!