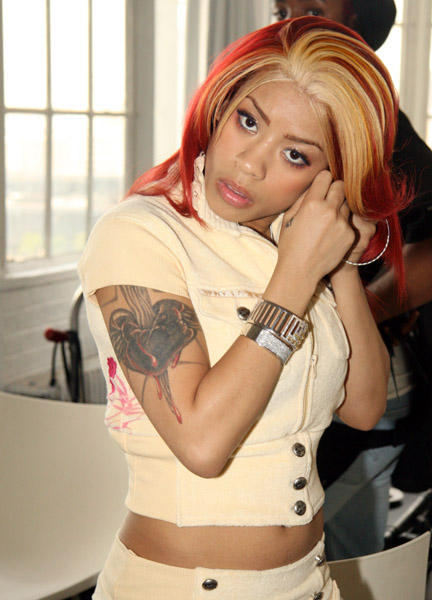 Keyshia Cole went back to her hood-rat ways when she attacked a woman who was in Birdman’s, her rumored boyfriend’s apartment.  But the victim, Sabrina Mercadel claims she wasn’t the other woman and has no idea why Keyshia would think that.

The Grammy nominated R&B songstress showed up at Rapper Birdman’s condo complex located in in West L.A.  At around 5 AM. TMZ says, she went there to see Birdman.  Why security let her in we’ll never know.  She probably threatened them.  When Keyshia saw the other woman she attacked her and left scratches all over Sabrina’s face.  It is unclear if Sabrina fought back, but she did call the cops and Cole was arrested. She was arrested for battery and an outstanding reckless driving warrant, but was released on a $46,000 bail.

Mercadel reportedly is an employee of Cash Money and has been for ore than 10 years. She and Birdman have known each other since they were young.  Sources tell TMZ, Sabrina was walking out of the bathroom when Cole say her in the apartment  and Keyshia instantly went on the attack and started yelling, “What are you doing with my man?!”  The attack was so bad, Sabrina went to the ER and is now on pain medication.

Birdman is known for being one of the founders of Cash Money Records and hits such as, Money to Blow and for discovering Lil Wayne.  As of 2014, his net worth is $160 million.

It is time for Keyshia Cole to focus more on her music instead of relationships.  They are obviously not working.  In March 2014, Cole confirmed that she and her husband NBA player for Cleveland Cavaliers, Daniel Gibson had separated.  Rumors are he cheated.  For the record not many knew Cole and Birdman were “dating” so this is a shock to some.  Neither have discussed the altercation, but I can’t wait to see what they have to say.