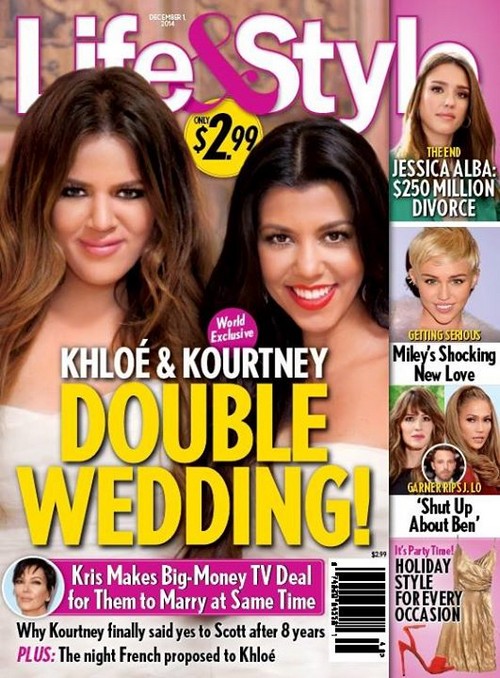 Kourtney Kardashian and Khloe Kardashian are getting married! Kris Jenner has landed a major TV deal and scored a boat-load of cash to marry off her two daughters to Scott Disick and French Montana in a lavish double wedding, according to the December 1st cover of Life & Style Magazine. The cover of the tabloid teases, “Why Kourtney Finally Said Yes To Scott After 8 Years, Plus The Night French Proposed To Khloe.”

Kris Jenner is a shark and has proven over and over that she will do anything and has no problem exploiting her family for some extra cash, so planning a double TV wedding is right up her alley. But, we have a serious problem believing that Kourtney and Khloe Kardashian are headed down the aisle. First of all, Khloe and French just got back together literally two weeks ago, the odds of them already planning their “I Do’s” are slim. And, Khloe is still legally married to Lamar Odom. As far as Kourtney and Scott, Scott is a hot mess and just overdosed on Kourtney & Khloe Take The Hamptons – she would be certifiably insane to choose now of all times to marry her baby-daddy.

The December 1st cover of Life & Style Magazine also teases that Jessica Alba and hubby Cash Warren are breaking up, and currently embroiled in a $250 Million divorce. Hollywood splits never shock us, but is Jessica Alba really worth $250 Million? Jennifer Garner and Jennifer Lopez are reportedly feuding over Ben Affleck, which is so last decade. On the up-side the cover also teases a story on Miley Cyrus’s new romance with Patrick Schwarzenegger – here’s to hoping she doesn’t screw this one up!

So, what do you think of Kourtney and Khloe’s double wedding? Is it another fictional tabloid story or is there some truth to it? Do you think French really proposed to Khloe? Would Kourtney be crazy to marry Scott? Let us know what you think in the comments below!