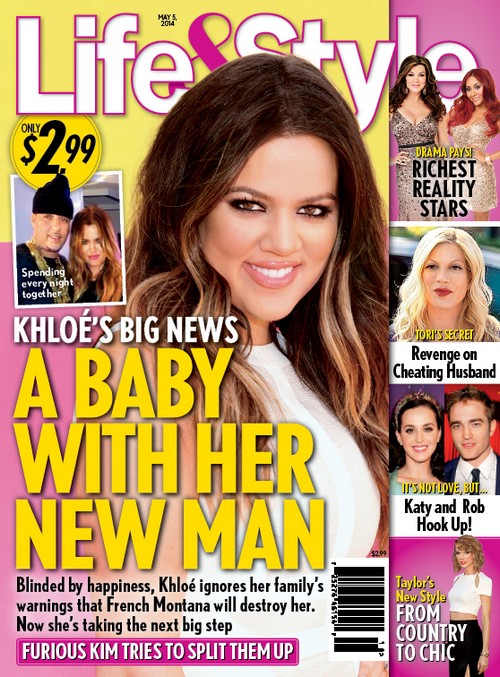 Khloe Kardashian is definitely dating French Montana, but is she taking it one step further – is she pregnant and having a child with him? I mean, they are spending practically every night together, and they clearly have no compunctions in getting photographed. Obviously, Khloe’s not stupid and she knows that the more she tantalizes the media with her new relationship, the more the paparazzi will come calling. For reasons that remain unfathomable to me, Khloe dating French is a BIG deal in the world of reality television. She hasn’t publicly dated anyone since divorcing Lamar Odom, even though she’s been linked to a few celebrities here and there.

Now, according to Life & Style’s latest cover issue, Khloe reportedly ‘ignored her family’s warnings’ about dating French and is planning on taking the next step with him after she found out she was pregnant. The report also adds that Kim Kardashian is trying to sabotage Khloe’s relationship with French because she’s jealous that her sister’s relationship is getting so much attention in the media.

Uh, does Kim know nothing? Khloe breaking up with French – especially after such little time – would be infinitely more fascinating to the press and the media than if they were to stay together. However, if this report is true [unlikely] and Khloe actually is pregnant, then we can probably expect French Montana to join the Kardashians, whether he wants to or not. Kris Jenner is not good at taking no for an answer, so French better reconcile himself to becoming a regular on Keeping Up With the Kardashians.

Life & Style also has a report on Robert Pattinson‘s friends with benefits relationship regarding Katy Perry, as well as a report on Tori Spelling‘s revenge plans on her cheating husband, Dean McDermott.