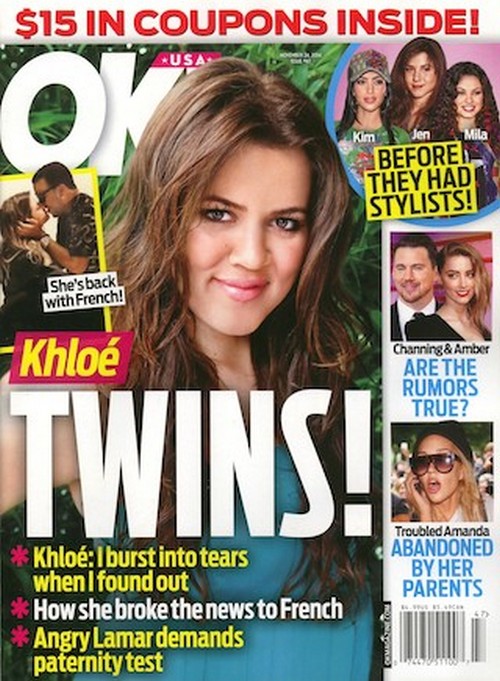 Is Khloe Kardashian pregnant with twins and is French Montana the baby daddy? That is the baby bump Kim Kardashian’s sister is carrying according to OK! Magazine. Khloe Kardashian and French Montana are dating and officially boyfriend and girlfriend again, and all is well in the world. After Khloe and French’s whirlwind romance earlier this year, which lasted way longer than anyone expected, the reality TV star and rapper pulled a “conscious uncoupling” and went their separate ways relatively amicably. Khloe then reportedly proceeded to try and work things out with her estranged hubby Lamar Odom.

So, why did Khloe suddenly drop Lamar and go running back to French Montana. Well, according to the November 24th edition of OK! Magazine, the youngest Kardashian sister decided to work things out with French because she is pregnant with his twins. The tabloid is reporting that attendees at Kendall Jenner’s birthday party on November 3rd were shocked when Khloe arrived with French on her arm, and the newly reconciled couple were all over each other – Khloe even gushed to anyone that would listen that she and French were starting a “new phase in their relationship.”

OK! Magazine goes on to say, “Khloe, a notorious partyer seems to be abstaining from alcohol. She picked up a champagne glass to toast Kendall [at her birthday party], but no one saw her actually drink from it. That’s a huge change for her.” Then there is also that fact that Khloe works out religiously, yet still seem to be gaining weight and not losing it. OK!’s inside source also claims, “Khloe’s hosting her family’s Thanksgiving celebration at her house, and she’s been teasing that she’s going to make a big announcement at dinner. People are putting two and two together and thinking she might be as far a three months along.”

All the signs are there, Khloe’s weight gain, sudden sobriety, and spontaneous reconciliation with French Montana – we would be shocked if she wasn’t pregnant. The odds of her having twins are pretty slim though, after all of her fertility woes it’s a miracle she even conceived, two babies would be pretty far-fetched. Do you think Khloe Kardashian is pregnant with French Montana’s baby, or babies? How do you think Lamar Odom will react? Let us know what you think in the comments below!

Khloe Kardashian attends pregnant reality star Kourtney Kardashian’s baby shower at the Montage Hotel in Beverly Hills, California on November 12, 2014 – according to the tabloids all 3 Kardashian sisters are pregnant! FameFlynet