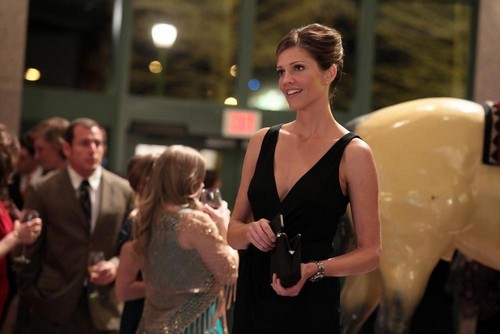 Molly is committed to finding the truth and seeing justice served. In a male-dominated world, she is aided by her sixth sense for why women kill — rarely out of hatred, usually for what they love.  Standing squarely behind her is her boss, Company Commander Luis Zea. Molly also has the support of her loving family, including her brother Billy and his wife Becca. On the verge of getting divorced from her narcissistic husband, Jake, Molly relishes her newfound freedom as she begins an affair with a sexy, dangerously handsome DEA agent, Dan Winston.

On tonight’s episode of all the notorious lawmen that ever patrolled the violent frontier, none are more storied than the Texas Rangers. Ballsy and badass Molly Parker (Tricia Helfer) is one of the first women to join this elite group of law enforcement agents. From executive producer SofÃ­a Vergara (“Modern Family”) and creator Hannah Shakespeare (“The Raven”), “Killer Women” takes us inside the dangerous world of the Texas Rangers from a female perspective. In “La Sicaria,” Molly is on the hunt to find the woman who killed an Assistant District Attorney inside a church during her wedding ceremony.

Tonight’s episode looks like it is going to be great and you won’t want to miss it, so be sure to tune in for our live coverage of ABC’s Killer Women premiere at 10:00 PM EST! While you wait for our recap hit the comments and let ushow excited you are about the season premiere of Killer Women?  Also, check out a sneak peek of tonight’s episode below!

RECAP: A woman in a red dress walks into a wedding and shoots the wife after she kisses her husband; she then gets away in a car. Molly gets a call about the murder and gets in her car and is on her way to join the chase for the girl; she is driving across the grass and onto the highway speeding. She then knocks the car off the road and gets out with a gun asking for the girl to show her hands, the person who comes out of the car is an old Spanish man.

Molly then arrives to the crime scene where the bride was shot, the police have a picture of her face and the officers congratulate her on becoming a ranger; Molly wants to talk to the groom. Molly goes in and tells the groom who she is; she brought him water. Molly says she is sorry about his loss and shows a picture of the woman in a red dress; the groom says he doesn’t know who the woman is.

Molly believes that the groom is telling the truth; Molly gets a call and gets a search warrant for a room. The S.W.A.T. are moving in on the location; they kick the door down and throw in a flash bang. They have the girl in custody and they tell her that she murdered a woman; she’s questioned how long she slept with the groom. The woman in the red dress mention how he was supposed to leave her; they were supposed to meet at the gym in the morning and has now been arrested.

Molly believes there is much more to this case; she doesn’t think the police have made a right analysis on the case.

Molly is laying in bed and is woken up by her alarm, she pulls down her covers and tells Lulu to get up. She gets in her car and drives to work; she checks on the grooms history of activity on his credit card. Molly tells Jake she doesn’t want to talk to him; Jake says that he moved out of their loft and that she can move back in by herself. He knows she needs time; Molly tells him to sign the divorce papers. Jake says he loves Molly and won’t do it; Jake hopes that she can believe that.

Molly is told to act on her disbelieves; she brings a coffee and other stuff to the woman in the red dress. Molly tell her she is being trialed for murder, Molly believes that she never had an affair with the groom; she wants to know why she’s lying. The woman says she wasn’t thinking when she pulled the trigger, Molly asks why she shot the bride; the woman says it was because he would hurt more alive.

Molly goes out to dinner with Luis, she is walking around and gets a message saying she is on the top of someones to do list. She then walks to a man and is now in a hotel room with him; the two of them then start going at each other; the two wake up together and Molly decides to get out of bed. Molly says they should help each other; Molly leaves and believes that the woman in the red dress might be someone from the cartel.

Molly drive to a neighborhood with Spanish music being played loudly outside, she enters a house and starts looking around; she finds a bible and flashes the flashlight on the pages. The woman in the red dress is in the showers at the prison and is stabbed by these other two girls.

Molly visits the woman in the hospital and shows her pictures of her kid and mother; Molly believes her family was taken by the cartel and that she is being used. Molly says that she sees it in her eyes and that she made a really horrible mistake; Molly mentions how she married a man and thought she loved him. Molly says that he was strong and felt protected, until one day he hit her over and over.

Molly says that she needs to be told the truth and all of it now; the woman says she was chased by the cartel and her family was taken and threatened to be killed if she didn’t cooperate. Molly asks Dan for help; Dan says if they do this then they do it alone.

Molly gets the woman in the red dress her family back; they have a reunion in the prison; Molly is now driving in her car and goes to work. Luis says he’ll see her in the morning the next day, a bank was hit and 4.1 million was taken; he says that if he ever finds out if she crossed the border to free the woman’s family then she is fired.