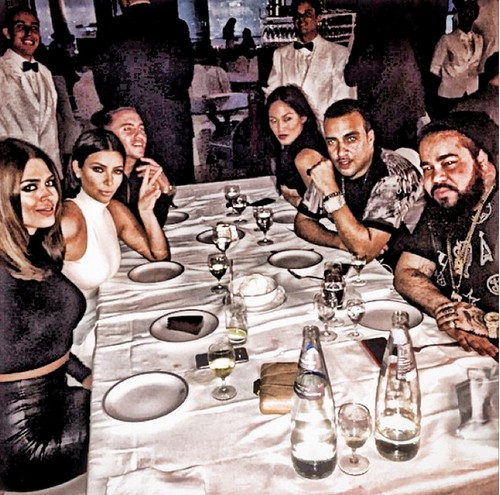 Kim knows very well how to plant stories through friends and “sources,” and has a hidden agenda when it comes to the relationship between her younger sister and her rapper boyfriend French Montana. While Kim’s sources are dishing that she is worried about poor, vulnerable Khloe being hurt by French Montana as she was by her estranged husband Lamar Odom, Kim is only worried about herself. Kim cares about herself first and is pushing Khloe to dump French—but not because she is worried he will cheat like Odom did. Kim is worried that if French is around, he will spill some of her secrets.

French Montana was all over Dubai with Kim while she was there promoting her new perfume Fleur Fatale (where do they come op with these absurd names). Kim tried to make it seem as though French was not around her much and just jumped into pics with her so he could make it seem as though the two were hanging out so his sometimes-squeeze Khloe wouldn’t worry about him creeping while away. CDL already told you that that was yet another planted story because we know French would never go to those lengths for Khloe Kardashian, and he was truly at the same parties as Kim.

Kim Kardashian wanted to make it seems as though French Montana was using her, but he actually was around her a lot and saw a little too much! Kim was drinking and letting her guard down while with her friends. As CDL told you, Kim got cozy with Tyrese and was having a blast without husband Kanye West. French was at the same parties and got an eyeful of Kim’s behavior. She is pushing Khloe to dump him because she knows if they remain together, eventually what happened in Dubai won’t be staying in Dubai and she’ll have some serious explaining to do. Kim is trying to make it seem as though she is being protective of Khloe, but the truth is, the only one she is trying to protect is herself!

Tell us what you think about Kim’s attempt to seem as though she cares about her little sis!