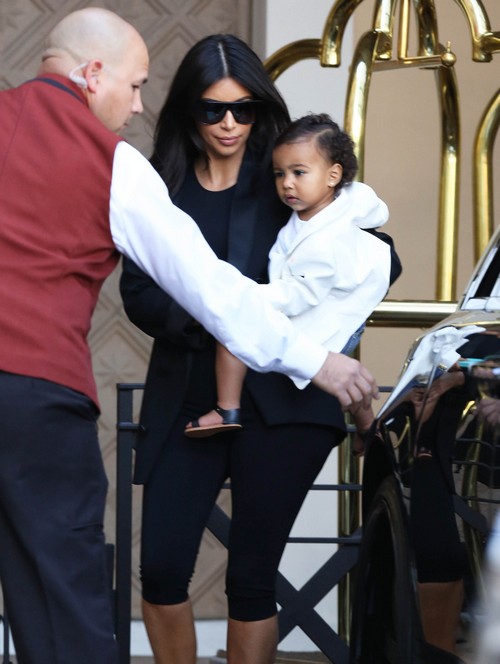 A variety of recent events make it appear that the rumors that Kim Kardashian and Kanye West are going to separate and divorce have real weight. Kanye West claims he always gets what he wants, and he is not about to let wife Kim Kardashian call the shots in how or where they raise daughter North West. Kanye has been voicing his opinion about moving to France full-time more and more, and is adamant about taking North with him. Kanye feels North will grow up in a more cultured environment in France. He loves the people, the lack of paparazzi and the legal restrictions they face, and being near the fashion houses he loves. Kim told Kanye she won’t ever leave her family, but friends suspect it is the spotlight she doesn’t want to leave. Without being in the tabloids weekly as she is in the US, there is no more Kim Kardashian. Kim has nothing, no talent, no career—without the benefit of being in the public eye, flashing her lavish lifestyle, people will forget about her and her Kardashian and Jenner sisters will claim the spotlight. She will never let that happen.

CDL has been on top of all the breaking news surrounding Kim Kardashian and Kanye West’s looming divorce and the demise of the self-centered couple’s marriage – and we’ve been bringing you all the details of their unstable union. Now, we’ve cracked the case of the mystery celebrity involved in a threesome with the couple before they were involved in a serious relationship. In Touch reported that they had multiple sources who claimed that Kim cheated on a longtime boyfriend with Kanye and another famous woman.  “Kanye was obsessed with Kim and wanted to have a three-way with her, and she didn’t hesitate,” one source told the mag. “Kim and Kanye had already been seeing each other behind her boyfriend’s back, and Kanye brought this other woman into it.” The encounter quickly ended after the other woman became jealous because Kanye was more into Kim than he was into her.

Well, Selita’s ex-fiance Nick Cannon dated Kim right before he and Selita became an item. Because it was his most recent romance, he talked a lot about Kim to Selita, making her slightly intrigued, and slightly jealous of the now-famous Kardashian.  Kanye was already infatuated with Kim after seeing her sex tape with Ray J and prodded Selita to join him in a threesome with Kim.  Reports then suggest that after Kanye was more into Kim than into her, she became very jealous and upset and the liaison was over. Take a look at Selita’s history of jealous outbursts. The Victoria’s Secret model and actress famously punched model Liza Irizarry, breaking her nose, after Irizarry exchanged a “hello” and peck on the cheek with Ebanks’ then-fiance Terrence J in a nightclub. Reportedly Ebanks was behind her fiancé-at-the-time, saw the exchange, and yelled at the model for talking to her man. Apparently, Ebanks punched her in the nose for getting too close to her man and the model sued Ebanks over the 2012 exchange. So, we have a timeline that matches up perfectly, the ex-fiance that would have made the celebrity intrigued by Kardashian, and a person who is extremely jealous. We also know the only well-known “famous” woman Kanye has dated was Selita.

Now that the cat is out of the bag, Kim will be working in overdrive trying to keep Kanye from pulling the trigger. CDL told you last week that Kim went to visit divorce attorney Laura Wasser. Could the divorce lawyer and Kim have tried to figure out a plan to hush Kanye so Kim can get the divorce she wants without any problems?

Tell us what YOU think below!