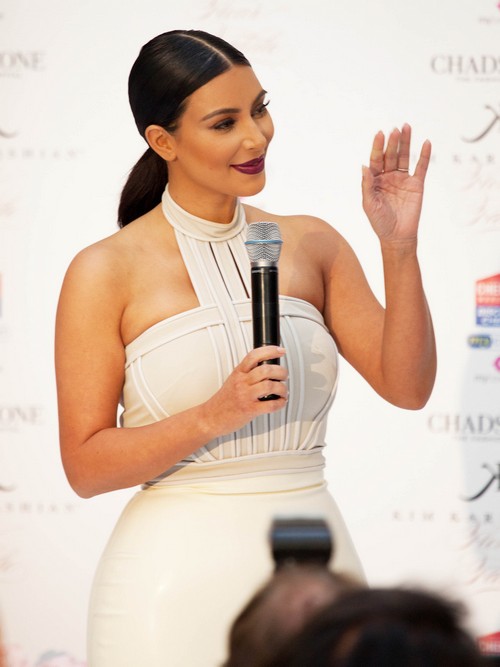 Kim Kardashian is taking charge of her own life and marriage to Kanye West but not in a good way! It’s apparent that Kim’s ultimate goal after her visit with a divorce lawyer this month is to split with Kanye and make sure she comes out the winner. Wow…Kim Kardashian sure knows how to play dirty! The reality starlet got wind that her hubby’s ex-girlfriend, Amber Rose, contacted him after her recent breakup with her husband rapper Wiz Khalifa, and she was NOT happy.  Kanye West dated Amber Rose after he admittedly became obsessed with her in 2008. Obsession is quite common for Kanye until he conquers his quest. Once he tired of Amber, he cheated on her with now-wife Kim Kardashian, leading to the demise of their once solid union. Kanye always felt bad because Amber was loyal to him and put up with a lot from him, while maintaining a supportive attitude no matter how much the public hated him.

Kanye, as a result, has always had a soft spot for Amber Rose and was more than willing to give her a shoulder to cry on after she and her husband split. She reached out and Kanye was receptive. He wanted to help her get through the bad emotional place she was in. Once Kim found out she flipped out. But instead of talking about it with her rapper hubby, she decided to give him a taste of his own medicine.

Though she had been communicating with her ex-boyfriend and co-star in her sex tape video that has made her millions, Ray J, for weeks already, she decided to take their chit chat one step further and invite him to her 34th birthday party celebration at Tao in Las Vegas. Kim really wanted Ray J there. She hasn’t seen him up close in years and wanted to show off a little. Plus, she is still very attracted to her ex and wouldn’t have minded a little flirting since he is technically single. Kim played it safe by also inviting her former friend, Ray J’s sister, Brandy. Oddly though, Brandy and Kim did not get along at the end, with Brandy bashing Kim for stealing after her brother broke it off with the former so-called stylist. Though she knew Brandy would never come, Kim invited Ray J and Brandy to her big bash, a source dished to British magazine Closer.

Kim brought up her little surprise invite to Kanye after telling him that she knew about Amber calling. Kim reportedly told Kanye that she’d keep talking to Ray J if he kept communicating with Amber. Kanye HATES Ray J and, once again, felt like it was a slap in the face from him wife. CDL recently told you about Kanye’s fury over the newfound success of Kim and Ray J’s sex tape after her Paper cover. Kanye is slowly starting to see some of Kim’s manipulative, coldhearted mom Kris Jenner in his wife and he doesn’t like it. He hates being disrespected and he feels that Kim is once again is challenging him. Kanye reportedly called Kim out for playing games as a result of her spontaneous invite, but she remained strong..finally getting Kanye to relent and stop talking to Amber. Based on the couple having secret conversations with exes, and then playing tit-for-tat games like this, things cannot be good.

This is just another nail in the coffin that is their marriage…ready to be buried. CDL has been keeping you up to date on the latest divorce news for the couple.  It is only a matter of time before the marital union between these two finally implodes and Kim Kardashian files for divorce.

Update: Now we learn that Kim was flirting with Tyrese Gibson in a Dubai Club! In fact the situation was so hot that Tyrese was thrown out of the club. What will Kanye think about this! Divorce is coming and you heard it on CDL first!