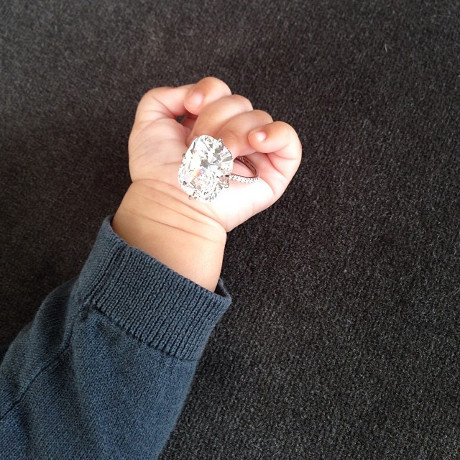 Kim Kardashian posted a photo that perfectly summed up her 2013 year. The Instagram photo showed North West‘s hand holding Kim’s giant engagement ring, of course presented to her by Kanye West in that grand proposal that quickly became a celebrity highlight of last year. Can we just take a second to examine that ring? Holy smokes. I wonder if Kim needs a crane (or forklift) to help her remove that sucker? And poor North West–her lil’ baby nugget fingers will be crushed!

We’re expecting a giant Kimye wedding in 2014 and, needless to say, we can’t wait to see the spectacles they have in store. You know for darn sure these two aren’t going to have a quiet (or humble) wedding. They’re going to go all out, put on not just a wedding ceremony but a show worthy of a Yeezus concert.

In other Kimye news, Kim Kardashian allegedly put together a montage of all her favorite 2013 paparazzi/interview/TV moments featuring both her and her boo. While we’re not sure exactly who made it, we’re assuming that Kim had a hand in the project, as she tweeted the video out to all her fans. So, regardless if she was the hand behind it, she definitely approves of it. And, let’s be honest, it’s 5+ minutes of Kim and Kanye praise/barf-inducing googly eyes to the soundtrack of “Stay” by Rihanna, so we know she signed off on the little video.

What do you think about Kimye’s Kraziness over the course of last year? They definitely gave everyone some juicy stories to nibble on!