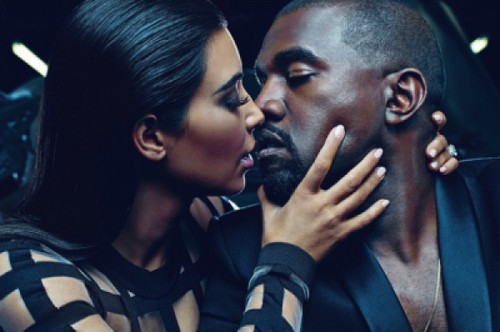 Kim Kardashian and Kanye West have gotten to where they are at today not by accident, but because they are master media manipulators. A perfect example of this is that despite all the divorce rumors swirling around the couple, Kim Kardashian and Kanye West decided to pose for a Balmain photoshoot showing them nearly kissing. And of course Kim couldn’t help herself, and uploaded the sneak photo from the campaign early, onto Instagram, Twitter, and no doubt every other social media outlet she has access to. It’s a picture of Kim Kardashian kissing Kanye West, and Kim expects everyone to treat that with the same reverie and respect as her.

Of course, the timing of this release isn’t coincidental – in addition to helping Kim and Kanye land the social media famewhoring prize of the year, the PR is also helping them combat the divorce rumors. So far, these past few weeks haven’t been kind to Kim Kardashian and Kanye West, especially in regards to their marriage. Nobody thinks that Kimye is going to last much longer, especially if Kanye continues abandoning his wife and child to go party with his boy toys in Paris.

Kim and Kanye do know how this works though, and they’ve used the media machine to their advantage before. For example, the Bound 2 music video? Or even the Paper Magazine nude photo shoot? They know exactly what will get the public talking, and hence, taking some of the spotlight off their incoming divorce.

Plus, this is a great way of showing off, and we know neither Kim nor Kanye can resist the opportunity to show off. An almost kiss sponsored by Balmain? I wouldn’t be surprised if Kanye begged them for the opportunity, and for some reason, fashion people continue to be enamored by Kanye and Kim so they keep giving them all these chances.