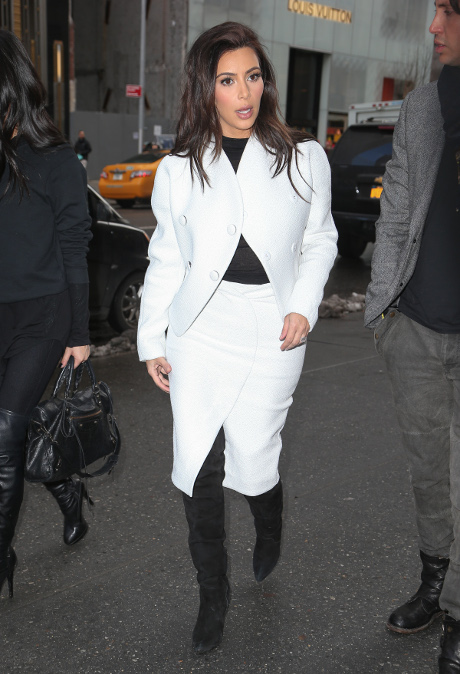 Kim Kardashian is standing by her man’s recent outburst, which attacked media outlets, including TMZ, for not being supportive of interracial relationships. Kanye West‘s original complaint stated that the media goes after him — and, to a certain extent, attacks him — because he’s currently involved in an interracial relationship. Is TMZ racist? According to Kim Kardashian, who indirectly called out TMZ right to their camera, they most certainly are!

When the TMZ cameraman asked Kim what she thought of Kanye’s rant, she said, “Very insightful,” with a laugh. The cameraman probed further and asked if she agrees with her fiance. At this point, Kim was already in the car but made an effort to say that, yes, most definitely, she supports Kanye’s opinions — which always make for an entertaining read.

In their own defense, TMZ writes, “Kim proclaimed her blanket support for whatever Kanye says … but it was clearly targeted at his criticism of TMZ. Not to brag … but we criticized Kanye long before he hooked up with Kim, like in 2008 after he attacked a photog at LAX, and after his Taylor Swift fiasco a year later.”

Let us know what you think about Kim and Kanye in the comments section below. Do you really think that TMZ and other media outlets pick on them because they’re in an interracial relationship or just because they have the tendency to be freaking annoying? You be the judge!