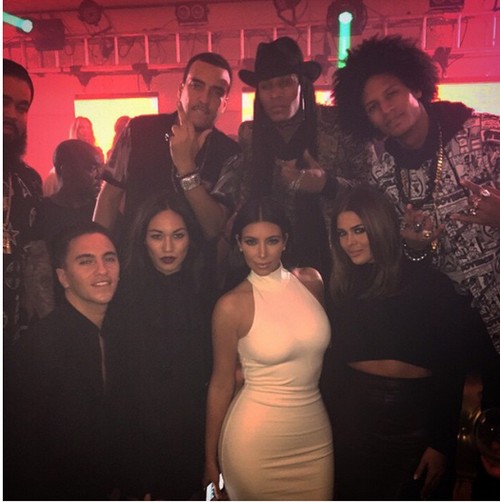 Kim Kardashian is not about to let her younger sister Khloe Kardashian steal the spotlight, and she is making her point very clear. Kim, who should be more on the same page with sister Kourtney Kardashian, who has children and a sort-of man at home, is actually living a lifestyle much more similar to younger, single sister Khloe Kardashian’s. Kourtney is rarely out at the clubs, and is often more likely to be at home with the kids than out in the spotlight. She has curves, but doesn’t get the kind of work done on her face or body as her sisters do—including her young step-siblings, the plastic surgery freak Kylie Jenner and new super model Kendall Jenner. Kim Kardashian doesn’t see Kourtney as threatening or as competition.

Enter Khloe Kardashian, whose backside has been growing, growing, and growing—just like big sis Kim. Kim is upset about the attention Khloe’s getting for her “bottom line” because Khloe is using Kim’s technique for a growing backside by getting fat injections. Now, Khloe is getting more and more attention for her body and, with no baby or moral compass to hold her back, (Kris Jenner traded the family’s moral compasses to the devil in a deal she made years ago), is out partying every chance she gets. Kim thinks having daughter North West has impacted her fans’ view of her, fearing she is no longer thought of as a sex symbol. So, she is infuriated over the fact that Khloe often draws more attention, and her curvaceous body is making it even worse! In report after report, Khloe and Kim are being compared over their bodies.

Kim, now, is putting Khloe in her place and showing her exactly who the top Kardashian is. Just to show Khloe who is in charge, Kim has been partying and going out to dinner with Khloe’s on-off love French Montana. Both Kim and the rapper have been gleefully posting pics of their fun nights out to Instagram, infuriating Khloe. Khloe confronted Kim, but Kim was flippant about the whole thing telling her little sister that she cannot help it if French wants to hang out with her.

French supposedly bought Khloe flowers shortly after the first series of pics surfaced, Perez Hilton dished, noting that Khloe posted a pic of the gift to Instagram with a heart emoticon. Kim and French were on a yacht together, out to dinner, and partying it up all over Abu Dhabi. Kim didn’t have a care in the world… not North, not husband Kanye West, and not Khloe’s feelings. In fact, Kim would be happy to know that she did get to Khloe.

Kim feels like the entire family should be grateful for all she’s done for them, and they certainly shouldn’t be trying to compete with her for the biggest booty. Kim sent Khloe a very clear message that she could easily have French if she wanted because she is the most relevant Kardashian.  Kim would never be interested in French, but she loves the flirting and loves exerting her power over Khloe. With sister like these…who needs enemies??

Do you think Kim Kardashian is wrong for partying with Khloe’s ex, French Montana, CDLers? Tell us your thoughts below.