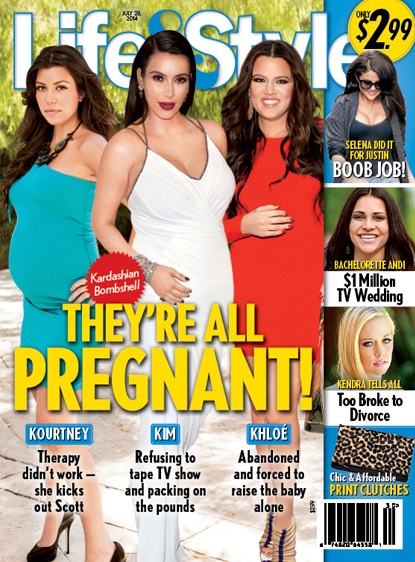 It’s no secret that Kourtney Kardashian and Scott Disick are expecting their third child, this was confirmed weeks ago by multiple sources. So, is Kourtney kicking Scott out? Who knows, is it really news any more if she did kick him out? No one can keep track of Kourtney and Scott’s weird relationship or various therapy and couple counseling endeavors. And, frankly no one really cares any more.

Once you open up the newest edition of Life & Style, the magazine goes on to say that Khloe isn’t technically pregnant yet. But, insiders claim she isn’t using birth control and is having sex with French Montana every waking moment of the day, so there was a good chance Khloe would be pregnant by the time the magazine hit stands this week. As for Kim, she was seen eating like a pig in Southampton, which she hasn’t done since she was pregnant with North, and her latest food bender has inspired rumors that she is expecting baby number two.

The latest cover of Life & Style Magazine also includes Kendra Wilkinson, Andi Dorfman, and Justin/ Selena. Apparently, Selena has just debuted her new breasts, which she of course went under the knife for in a desperate attempt to reel Bieber back in. Kendra confesses that she can’t afford to pay for a divorce, and ironically, Andi Dorfman is in the process of planning her million dollar wedding.