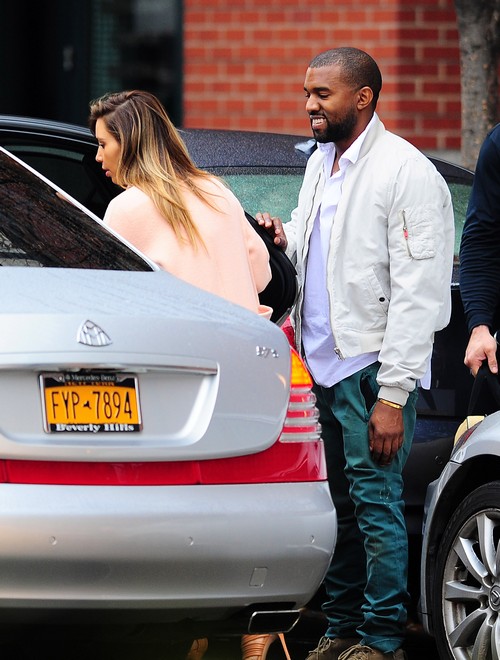 Ah, what a mess for Kanye West and Kim Kardashian. Yesterday, as Kim tried to make her way from her car to a medical building she encountered a guy that at first seemed to want to help her to keep the paps at bay. He started to escort her inside but once he started throwing obscenities and gay slurs at the photographers Kim called him on it and the whole thing turned ugly. Within minutes Super God Kanye West showed up swinging. He went into the chiropractor’s office, found the 18-year old guy in the waiting room and attacked him until staffers pulled the men apart. Of course a criminal battery investigation is underway and Kanye is screwed because there were witnesses galore.

Kimmie to the rescue, as the reality star is now claiming that they guy yelled at her “I will kill you slut.” which can be classified as a crime as well. She has already met with her attorney according to TMZ and will be launching a counter attack against this kid. I’m not sure if she thinks that this will somehow get her man off the hook but if so, that’s pretty unlikely. The DA in the case also has Kanye for assaulting a photographer at LAX which means that a pattern of behavior has emerged and it’s one that can easily put Kanye behind bars for a bit.

Do you think Kim’s counter attack will hold any water? I also can’t help but think that this is certainly not the first time that threats have been made on her life, not that it’s right, but she has never bothered to pursue anything else. Will she be able to save Kanye or do you think he’s going to end up in a jail cell for awhile? Besides it’s obvious that Kim did not feel threatened when Kanye arrived since she had remained at the office! Kanye is not allowed to put his hands on people no matter what they say and he needs to be arrested and punished for it – stat.  Shut this animal down. Tell us your thoughts in the comments below!