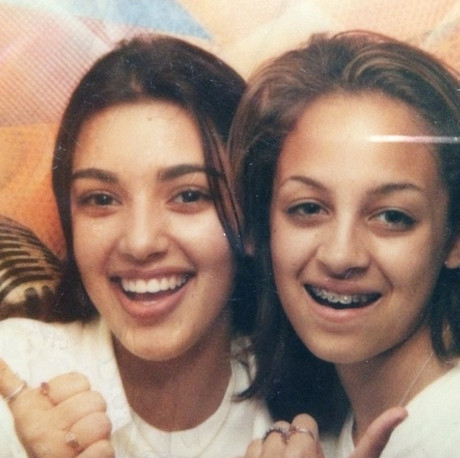 In an epic throwback picture, Kim Kardashian and Nicole Richie pose together as only thirteen-year-old BFFs do — each flaunting a cheezballz smile and, in Richie’s case, an awesome set of braces. Kim shared the pic on her Instagram account with the following note: “Oh so cool at 13 years old.” Nicole promptly retweeted the pic, clearly taking a jab at her own appearance. “Brace yourselves,” she warned her fans.

Nicole Richie is one of those people who always looks the same, no matter her age, but Kim Kardashian definitely went through a transformation that makes one take a second glance. She definitely resembles the famous celebrity currently engaged to Kanye West, but let’s just say that photo is probably her “pre-plastics” phase and before she could fully fathom the amount of fame that’d shape her future.

While the Kardashians are some of the biggest, most-talked about celebs right now, some are wondering exactly how long their empire will remain strong. As we reported earlier, “Season 9 of KUWTK, set to premiere on January 19th, could make or break the Kardashians’ reality TV franchise. The family’s ratings have plummeted and everyone, including Kris, knows it’s just a matter of time before E! gives them the axe.”

How much longer do you think the Kardashian name will be relevant? Reality TV stars’ time in the spotlight always comes to an end; it’s just a matter of when. Just look at Paris Hilton.

What do you think of Richie and Kardashian being their badass thirteen-year-old selves? Leave your thoughts in the comments section below; we’d love to hear from you!