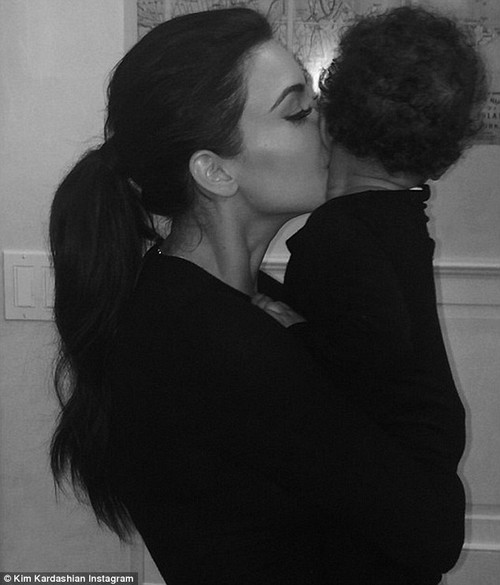 It’s hilarious that Kim Kardashian continues to famewhore North West, even as it becomes clearer and clearer that North regards her mother as some sort of alien stranger woman. Look at pictures of them together, and tell us – do you spot affection in those pictures, or fright? Nori looks confused, scared, and downright bored at times. Contrast that to pictures of Kate Middleton and Prince George. George is ALWAYS looking for his mother, and Nori is always looking away from her mother. Surprise surprise, Kim probably doesn’t even realize that that’s a bad thing.

In her latest black and white Instagram photo, Kim once again uploaded a picture of her and North, this time kissing North’s face. However, North is turned away from the camera… again. Either she really, really hates being photographed [which is possible] or she’s dying to go back to playing with her nanny and getting away from this weird wax figure doll who keeps putting the camera close to her face. I’m going with Option #2, only because North constantly looks like this next to Kim! It often looks like North is actively trying to get away from Kim, which is how babies react to strangers or people they don’t know that well.

And why would North know Kim? Kim is constantly abandoning North to jet off on vacations with Kanye West, or extended honeymoons, or extended tours – or basically, anything that will allow her to take a break from being at home.

What do you guys think of the photo? Let us know your thoughts in the comments below.