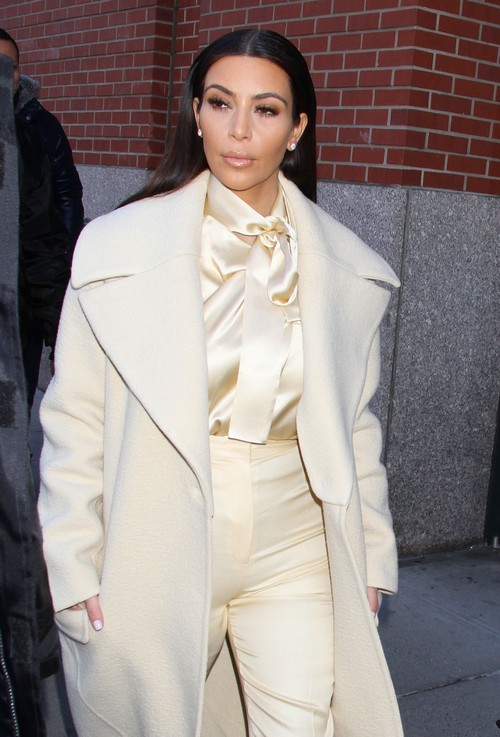 Oh boy. I had to take a minute to gather myself before even touching this one. Riccardo Tisci is a designer from Givenchy who has been super close to Kanye West for the last few years. So close that when Kanye opted to spend most of Kim Kardashian’s pregnancy in France with him rumors flared that the two were lovers on the DL. I have a hard time getting a real read on this guy because he dresses both Kim and Kanye for important events and on some recent occasions she has looked pretty decent. Although when she turned up for the Met Gala last year wearing what could have been my mother’s couch circa 1985, well that seemed like a spite move if ever there was one.

Anyway, Tisci recently told The Sunday Times that he believes that Kim is the equivalent to a modern day Marilyn Monroe. That must make Kanye the modern day Leonardo DaVinci? Tisci also said that while the whole world thinks that she’s very fragile, Kim is in fact a powerful woman. I have to take issue with that. No powerful woman would tolerate Kanye and there’s no way in hell he would want one at his side. He likes to have a Muse not a mouthpiece.

Anyway, the notion of Kim being anything like the late Marilyn is laughable at best for so many reasons. Marilyn was a natural beauty while Kim gets more plastic surgery every week. Marilyn was also a hot mess and knee deep in addictions, but at least she was real and honest. Kim seems to think that reality is something you make up in a meeting and then play out while a camera crew follows you.

It’s like Tisci is having a passive aggressive battle with himself over his true feelings for Kim. Every time he does something positive it is chased by a negative. First he likens her to Marilyn which is a compliment of sorts, then he dresses her in the worst cream colored pants ever. These things are high-waisted and I’m not sure if Kimmie is wearing a Depends under them or if she’s pregnant with baby number two. Is there a possibility of that? Tell us your thoughts on Kim being compared to Marilyn and what the hell is happening beneath these pants in the comments below!