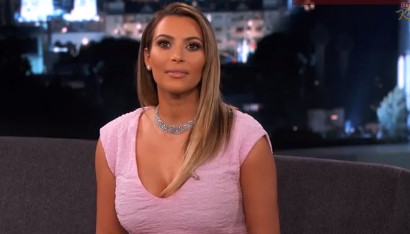 Kim Kardashian appeared on Jimmy Kimmel‘s show recently and, while being interviewed, chatted about her impending marriage to Kanye West, the location of the wedding (most likely Paris), and she even threw in some information about her dear sister Khloe Kardashian. Kim talked about Khloe’s issues she had with Lamar and wasn’t shy on revealing intimate details regarding Khloe’s pregnancy attempts. We’ve always known the Kardashian sisters to have big mouths, but doesn’t it seem as if Kim’s breaking some form of sisterly code by commenting on things that she really has no authority — or business — to talk about?

“Khloé wasn’t trying to get pregnant,” Kim said. “She wasn’t showing up to these doctor appointments on purpose and behind our backs because she knew [the marriage] wasn’t working.” And when Jimmy said, “You knew Khloé and Lamar weren’t going to work out, you said it,” Kim took the defensive and said that that probably wasn’t her. “That doesn’t seem like I something I would have said, maybe Kourtney said it.”

What can we glean from this interview? Are the Kardashian sisters slowly pulling apart from one another? Does Kim Kardashian secretly blame Khloe Kardashian for the Kardashian Empire’s sudden decline in popularity? Who knows. During the interview Kim also says that Khloe is probably the best babysitter for North West in the family — so perhaps Kim’s statements regarding Khloe’s failed romantic life were just a brief slip of the tongue, or weren’t really meant to be taken in a negative light at all (which is, of course, probably the case).

What do you make of Kim’s interview? Do you really believe that Khloe never wanted a child, especially with Lamar? Watch the clips below and leave your thoughts in the comments section below.