Kim Kardashian Video Game Coming To An iPhone Near You: Go On A Kim K Red Carpet Adventure! (VIDEO) 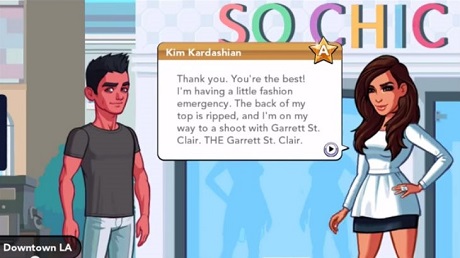 Kim Kardashian is one of the most recognizable celebrities in the world. In fact, Kim has been labelled as a super-celebrity – an astute title given to Hollywood’s elite. A global brand of this magnitude now includes the gaming industry. Yes, dear gamers, Kim Kardashian will release a “game” on iOS and Android very soon.

Kim Kardashian: Hollywood will give you the opportunity to “Join KIM KARDASHIAN on a red carpet adventure!” You can “customize your look with hundreds of style options” and “star in a huge interactive adventure as you encounter other celebs, dedicated fans, persistent paparazzi… and even hang out with Kim herself!”

Oh.my.dear.gawd. You can hang out with Kim? That sounds about as exciting as hanging out with William Shatner in a North Korean prison camp after a nuclear apocalypse. The fun doesn’t stop there though. You’ll have the chance to “RULE THE RED CARPET”, “TAKE OVER L.A.”, “DATE AND DUMP CELEBS” and – wait for it – “BRING YOUR FRIENDS ALONG FOR THE RIDE”.
Don’t throw away your Chernobyl pills just yet, because it gets much, much worse.

One of the screenshots shows an animated Kim saying to a rather sunburnt “friend”: Thank you. You’re the best! I’m having a little fashion emergency. The back of top is ripped, and I’m on my way to a shoot with Garrett St. Clair. THE Garrett St. Clair.

What happens if the player doesn’t fix THE animated Kim’s “ripped top”? Will you die in seven days? Will THE Garrett St. Clair send you to the virtual gallows? Will it rain unicorns?

There is some solace in the fact that the game will be a “freemium” release (download for free and purchase in-app content). We can always delete the game, but THE animated Kim Kardashian and her horrific sunburnt friends will haunt our dreams for eternity.