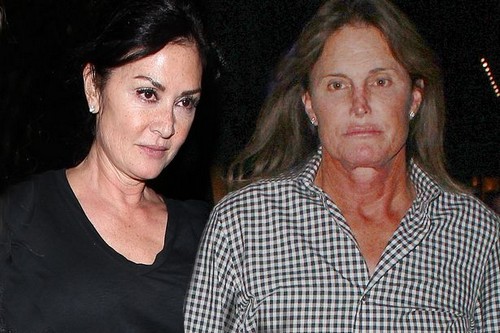 Kris Jenner is either planning a spinoff show for her and BFF Ronda Kamihira—both divorcees, or is giving her drinking buddy the gift of publicity by strategically placing her in the spotlight with a well-crafted hot date with her ex, Bruce Jenner. While the media has been fooled to believe that Kris is heartbroken over her best friend dating her ex-husband, CDL has the REAL story!

Kris Jenner plans every move she and her family make, so there is not a chance Kris would be blindsided by Bruce taking her BFF on a date. Everything that happens in the Jenner-Kardashian world is calculated by Kris to generate publicity, and everyone knows that Bruce is far too scared of Kris to cross her…so it makes sense that Kris concocted this idea and Bruce went along with it. Bruce Jenner and Ronda Kamihira know each other well as Ronda and Kris have been best friends for years. In fact, Kendall and Kylie are good friends with Ronda’s two daughters, having known each other for years—basically growing up together. So for Bruce, it was no problem at all to take Ronda to an Elton John concert. Not only are the two friends, but Bruce hoped it might deflect from the non-stop rumors of him undergoing gender reassignment .

For Kris, plunging her friend into the spotlight serves many purposes. Kris has been helping Ronda for years, even employing her as her personal assistant for a time. Jenner takes her unemployed buddy on vacations, paying her way and allowing her to enjoy the lavish life that she and her famous clan lead. Ronda knows basically every secret imaginable. Kris needs to keep this friend happy so that she remains loyal and doesn’t ever consider spilling any of the juiciest juice she has on Kris and her family. Kris also wants a friend around, and her partying bestie fits the bill perfectly.  The two are both divorced, love to party and travel, and just like Kris, Ronda has two young daughters. Two young daughters who, by the way, just so happen to be trying to ignite their modeling careers. What a coincidence, right? Wrong. Remember, we are talking Kris Jenner, folks.

I think everyone knows by now that Bruce has zero interest in women, apart from trying to look like one, and Kris has zero interest in Bruce or anything he does.  Kris knew very well that if her friend was seen with Bruce in such a public setting, she’d be everywhere…in every tabloid, on every gossip site. Now Ronda and her daughters are benefitting from the hailstorm of publicity and are going to use it to their advantage so Ronda can make a name for herself and her daughters and maybe, just maybe, she will pimp them out the way Kris has done with her misguided daughters. Even more likely is the possibility of the two divorced moms starring in a Keeping Up With the Kardashians spinoff that follows the two as they travel the world together and manage the career of their young daughters. Well played, Kris! But CDL is on to you now and soon the others will catch up to us and call you out on your translucent plan. Your move now…CDLers are anxiously waiting!

CDLers…how long do you think it will take the others to catch up on Kris’ hidden agenda? Is it all making sense now?